where else can you have an in-depth discussion about gender identity and buy a churro? 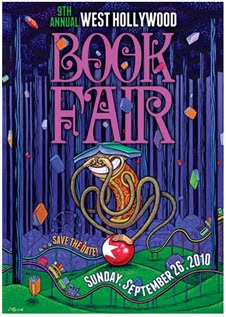 Scene: a windowless room at West Hollywood City Hall. A map of West Hollywood—-which, interestingly, is shaped like a gun, hence the city’s cop cars sport big rainbow gun logos—-hangs on the wall. Bookish types are gathered around a conference table.

City of West Hollywood Employee Lady: Our transgender advisory committee wants to sponsor a panel at this year’s book fair, but we’re not really sure where to start.

Me: I could suggest some writers.

Flash forward six months. Guess who’s moderating a panel titled “The Many Genres of Gender” at the 9th Annual West Hollywood Book Fair? Although I’m always a little amused by how volunteering to help automatically turns into volunteering to help a lot, I don’t mean to imply that I’m in any way reluctant to moderate. I think this will be a totally interesting panel with some stellar writers: Ryka Aoki de la Cruz, Morty Diamond, Max Wolf Valerio. But I do feel the need to explain why I’m moderating a panel that centers around an identity I don’t have.

When I learned that men are 26 times more likely to have the type of hernia I had, I did secretly wonder for a minute if I were intersex, but mostly my girl-ness has been one of the few things about myself I haven’t questioned. So I don’t want to be a big nosy poseur. It would be kind of weird if a white person moderated a panel about Asian American writing, right? I feel reasonably well-versed in the trans literary canon, but maybe that’s like saying, “Well, I read a lot of manga.”

But enough with the PC second-guessing. To moderate, all you have to do is ask questions, which is the best way to learn about any experience that’s foreign to you. Also, in certain photos, I feel like my neck and jaw line could totally pass for MTF.

you'll be great! i applaud the lack of gender stereotyping that the west hollywood book fair is showing in selecting you as the moderator!

Thanks for the vote of confidence. Yes, they're very progressive and/or lacking in moderator options.

Sounds cool. (Why did I switch coasts again? sigh.)

"To moderate, all you have to do is ask questions, which is the best way to learn about any experience that’s foreign to you."

~7 years before I started blogging, I read Xena fan fiction. 1 of the most talented writers I came across wrote an epic uber-Xena story (Xena & Gabrielle's characters in essence but displaced to another time & setting. Reincarnated, essentially, it was a story that could stand on its own.) which featured drag kings. I ended up having a fascinating correspondence with the writer who was a drag king about the life and gender identity. S/he was gracious in answering my questions, and I was grateful to learn.

This continues to be one of my favorite varied topics, not just in school, but in the real life examples I get to observe and interact with at work.
(does that sound too 'Jane Goodall?')
So sorry to have to miss this on Sunday, but we'll get to read about it here, yes?