cures for a crappy week 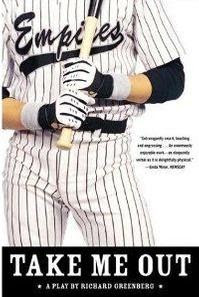 This week fried me. It wasn’t so bad, in the grand scheme of things, but I’m a sensitive soul. Lose one grading day to PMS-fueled internal drama and I’m done for. This morning I finally scooped myself out of the little hole I’d dug via a writing date with Kathy and Bronwyn. I worked on a scene from my cats-and-Malaysia novel (remember that? me neither) that felt like it had some meaning behind it. Recently it’s just been mechanical tweaking and even more recently it’s been not writing at all.

There are so many movies and grant applications out there full of teenagers testifying to how writing saved their lives that one can get a tad hardened to the notion. Does writing feed people? Does it even fill potholes? No, but it makes the world a little sparkier, and then I’m capable of doing other things.

I have not fed anyone or filled any potholes today. But I’m blogging and I feel like talking to people again. Tomorrow the world!

I’ve also been meaning to recommend a play: Take Me Out at the Celebration Theatre. Is it even still running at this point? Hang on, let me google. Yes, it is (through Dec. 19)! Good. Here’s why you should see it: It’s a tightly written and very well acted play about a major league baseball player who comes out as gay; as the handsome, celebrated player butts heads with a hickish rookie, the play examines what it means for a golden boy to become a victim and a victim to become a perpetrator. The play is also a lovely homage to sports fandom, which says a lot, since I am so not a sports fan. But Take Me Out depicts the player/fan relationship as much like the artist/fan relationship—it’s interdependent, and it’s an exchange. And when you’ve had a shitty week, hitting a ball with a stick or making up some crap and typing it can go a long way.

Happy to see our writing date included as one cure for a crappy week. Definitely lowered the crappiness quotient for me too.

I dunno...I'm a big believer in the William Carlos Williams quote:

It is difficult
to get the news from poems,
yet men die miserably every day
for lack
of what is found there.

That undefinable something contained in the arts, whatever art you practice, is what makes us capable of being human.

(I realize this is basically what you're saying too, I'm agreeing with you, but I'm doing it in an awkward, hard to identify with kind of way.)

Have a great weekend!

E: Lovely. That WCW should have a blog.