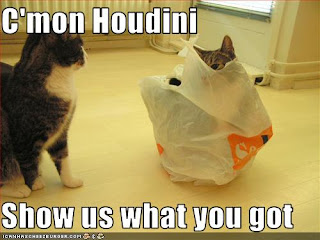 I was feeling all Zen after yoga yesterday because during shavasana I conjured up a lovely visualization of leaping from an airplane. Nothing in me wants to do that in real life, but in my head it was like a movie: My parachute was fluttering, but there was no sound except for pretty music, and everyone I loved was waiting for me on the ground. This had to do with ending therapy (till next time) and embarking on new adventures and stuff.

I wanted to ride that feeling straight to bed, pausing only for the leftover half of AK’s burrito from Señor Fish and leftover espresso brownies from Christine, but Team Gato was having none of it.

Ferdinand was mysteriously MIA, which is not uncommon after dinner, but very rare when he hasn’t eaten.

“It is Thursday night,” AK mused. “Do you think he has a gig? Thursday’s a big party night.”

We talk a lot about how Ferdinand is a DJ. He’s cool like that, although in real life, loud noises frighten him, so he’d be a very mellow DJ. Think Garth Trinidad. Or anything that doesn’t sound too much like a garbage truck or someone coughing. He hates those things.

My tendency is to worry whenever possible, but I was really tired, so if AK had said, “Let’s just see him in the morning,” I probably would have gone for it. AK’s tendency is not to worry, but she loves Ferdinand so much that she makes up careers for him.

So we rallied and got flashlights and wandered around the neighborhood calling him. We’d made it halfway down the street that’s perpendicular to ours and had turned around to try another direction when we heard his signature meow (which is a little higher than he’d probably like to admit).

I swung my flashlight beam up the driveway where the sound was coming from and saw two bright eyes. Normally Ferd would come running at this point, but he didn’t. So we walked closer and saw that the two eyes were behind a metal grate in the crawl space of someone’s house.

Apparently this was typical Ferd back in the day. AK claims her ex had a sixth sense: She’d sit up in the middle of the night and say, “Ferdinand is trapped somewhere!” Neighbors had to be roused to set him free from garages and other inescapable places.

Luckily this particular grate popped off with the push of a lever. Ferdinand trotted out, purred a little bit more than usual and then was like, “What’s for dinner?”

My cat, Baby, used to somehow traverse our basement into the basement of the other side of the duplex. Drove me fucking nuts.
I hate the way they are so nonchalant about that shit. Like You were looking for me? I was TOTALLY HERE.

Would his show be Catnip City? Ferdinand channels Garth Trinidad. Maybe he should be getting a slice of the KCRW bankroll.

RH: Catnip City--I love it! Call and donate to DJ Ferd during the next pledge drive, everyone.

PV: Just a little bit of espresso. The fact that Ferdinand was home safe and sound helped me sleep better than a lack of espresso could.

thank goodness i'm not the only one who makes up stuff about their cats.

niki was a runway model in paris where she picked up a bad smoking habit.

serenity has self esteem and body issues. she's a recovering bulemic.

anne and emily were abducted by aliens. and i think emily is an alien replica of anne. i have yet to prove this, but you should see the looks emily gives me...

Good to know! Next time I see you, I'll bring a pack of cigs for Niki (although maybe I shouldn't enable).

J: Also, T-Mec is working on her PhD in neuroscience. Her dissertation is on "Why do some cats talk so much?" OC (the talker) works as a sherpa.