what i read in september 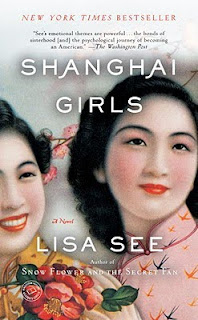 I’m teaching again, which I love, but I already miss recreational reading. Poor Kelly Link—I’m making my way through Pretty Monsters ever so slowly, even though her stories are deliciously weird, like a tweak of Aimee Bender’s tweak of reality. Anyway, here’s what I read last month, back before 15 new students entered my life:

Shanghai Girls by Lisa See: There is a tightly written story of two sisters and their competing histories contained within the many pages of this sweeping historical epic. I took the former for somewhat superficial (Pearl is the smart sister, May is the pretty one, been there, read that) until the final chapters, when it becomes clear that we've been reading Pearl's very subjective take on her family's journey, and that See's characterizations are entirely strategic.

See's impressive strengths as a plotter and researcher are hindered a bit by her overly expository language. Even as I geeked out on the many, many factoids she provided about roaring 1930s Shanghai and paranoid post-war L.A. Chinatown, I kind of wanted her to dial it back. When a character pauses to tell you about the history of the Chinese Exclusion Act, rather than just chafing at its effects, you just want to shoo the author out of the room. But while my inner history nerd and inner unsatisfied poet battled it out, I tore through this addictive novel.

The Art of Mending by Elizabeth Berg: My freshman-year roommate once accused me of always interrupting people to tell stories about myself. My defense then and now is that this is how people relate--through stories. But after reading The Art of Mending, which constantly interrupts its own narrative to tell representative anecdotes about friends of friends, I can see how this could be an annoying habit. The Art of Mending is a novel about memory--specifically, how one child can grow up in an abusive household while her siblings have a totally different experience. So the constant mining of stories and memories is thematically appropriate, but after a while it felt like the author was throwing in stories-within-stories to flesh out a weak plot. The family psychology here is fascinating, so she shouldn't have needed to.

The Age of Innocence by Edith Wharton: My long commute is helping me fill in the significant gaps in my canonical knowledge, thanks to books on CD. This one has earned its place on syllabi everywhere (that is, everywhere except the American Lit and Culture classes I took, in which we discussed the racism portrayed in Beverly Hills 90210). I envied Edith Wharton's ability to describe the most intricate, ridiculous yet life-shattering social conventions. Wharton performs the radical and still relevant work of demonstrating how class divisions and gender roles leave even their apparent beneficiaries impotent, but I also loved the moderate epilogue. She seems to say that history marches on even when its individual players get weary and fall out of step. There's comfort in that, and maybe because I'm past my own age of innocence, I like a little comfort with my radicalism.

The Thin Man by Dashiell Hammett: After rereading The Big Sleep last year and now reading this, I've decided I'm definitely on Team Dashiell rather than Team Chandler. The narration is tight and funny, the girls are a little less hysterical and Nick Charles doesn't think they all want to sleep with him the way Philip Marlowe does. Nora is the coolest chick ever--I love when Nick throws her down to protect her from a bullet and she laments that he blocked her view of the action. But somehow I still found the story itself a slog, ironically because it was so quick-moving. Am I saying I'd prefer a cozy? How about a cozy starring Nora Charles?

If you want to see how awesome Hammet's dialogue truly is, watch the Thin Man movies. Because Myrna Loy? EXACTLY how I imagined Nora to be.

Sara says the same thing. Off to my Netflix queue now....

Dude, you MUST tell me what you think of them. MUST, I SAY.

Will do, although AK and I move through our queue pretty slowly, so even scooting it up the list, I might be reporting back in 2011.