i believe the video game-playing children are our future 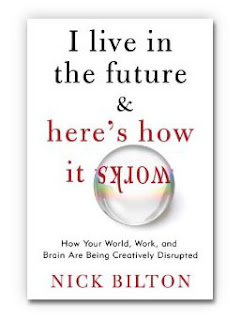 Nick Bilton lives in the future. Or at least he wrote a book called I live in the future & here’s how it works. AK and I went to a Q&A he did with the surprisingly funny Tess Vigeland at the KPCC studios yesterday morning. The new Mohn Broadcasting Center lives in the future too, painted colors that don’t contribute to the heat island effect (so said a plaque on the wall). Scones were served on bamboo plates.

Not too many people showed. This may have been because it was 8:30 in the morning, but I was a little bit comforted to know that even “business forums”—not just literary events—have trouble drawing a crowd.

Or maybe everyone will just download the podcast later. That’s what Nick Bilton would say.

He’s a youngish guy, by which I mean about my age, which is increasingly less youngish. He wore a blazer and jeans and thick-rimmed glasses. “I know he lives in the future,” I whispered to AK as we walked in, “but he looks like he lives in Brooklyn.”

When he said, later, that he lived in Brooklyn, I felt further comforted. At least I know a thing or two about the present.

According to Nick Bilton and the book I will read in the near future, in the only-slightly-less-near future all content will be available all ways. You won’t need to do anything so archaic as go to different websites for different information. But while new things and ideas will burst into the world in multiple formats (book, podcast, video, video game, Twitter feed), you’ll really only need one device in order to consume them, and it will probably be your phone. Not my phone, which takes blurry pictures and has no keyboard, but your phone. In the future.

He said that because of this, Marshall McLuhan’s big idea of the medium being the message is no longer true. The message is now the message. Hurray! We’re free! Except later Nick Bilton said that we buy books because we wouldn’t want all that info on Post-It notes—i.e. we pay for a certain type of media experience—in which case the medium is still at least part of the message.

But I don’t fault Nick Bilton for a little inconsistency. He secretly lives in the present just like the rest of us. All we can do is guess: Is it true that our visual skills will sharpen from playing video games and soon most of our storytelling—whether fictional or nonfictional—will be interactive and awesome? Or, as Malcolm Gladwell counters, is clicking “like” on a Facebook cause a sorry excuse for activism which will never bring about real change because it’s so damn shallow? The answers are probably yes and yes.

Nick Bilton emphasized that he’s not an internet utopian. He worries about privacy. He did not declare all old things dead. He thinks we’ll probably still read books (or at least e-books) as literature, even as our history-class texts morph into history-class video games.

I will always have a special place in my heart for my AP U.S. history book, The American Pageant, so I appreciated his historical examples of people who freaked out about new innovations—like the doctors who thought riding on trains would make people’s bones explode. He did not bring up examples of inventions that have harmed people, like the X-ray machines in shoe stores that my mom remembered from her childhood, where you could watch your toe bones wiggle.

Despite all the unanswered questions, I appreciated Nick Bilton’s positive spin. I’m tired of worrying that writing a novel is as pointless and self-indulgent as taking up a medieval instrument. It’s nice to think that people may just listen to novels and medieval music on their ear buds, and that this is fine. I’m tired of worrying that my future kids will be violence-crazed cyborgs with five-second attention spans. I’m awfully tired for someone with so much future in front of her, probably because I’ve been told by my parents and the media (in different ways) that the future is inherently scary.

Nick Bilton’s future is a glimmering net, where people still get together for dinner parties but can call up an image of anything they want. Glinda the Good Witch arrives in her shiny bubble. Everything is democratized and personalized, if maybe a little too personalized. Your frying pan knows you like your eggs sunny side up, but will you ever learn to try them over easy? Here I go again.

All I want on any given day is for someone to tell me it will all be okay—which is a problematic thing to want, but it was nice that Nick Bilton was that person today. Who knows who it will be in the future?


P.S. The past is always a tad more fascinating than the future to me, which is part of why I love Susan Straight’s writing (how’s that for a transition?). She makes history as vivid as the present, and modern times timeless. I’m so excited for her new book, Take One Candle Light a Room. Come see her read Tuesday, 10/12 at 7:30 p.m. at Skylight!

My senior year of college while battling with finishing a thesis film with mostly useless team members, "it will all be okay" became my motto. I'd say it to my friend the director (not useless) and she'd say it to me.

'Cuz really, it was just a movie, you know? The motto stayed with us bouncing back and forth for a few years after.

Nowadays, it's more "I'm ok right now," because no matter how much I freak out about future things or states of being, this statement is generally true.

Totally true. Now I just have to believe it.

i feel as long as there are ppl like you and me then the future isn't that cyborg-y.

i'm really hoping to try and raise my children a bit different; i'm hoping to avoid the television, i want them to ease into the cyborg-y part of life slowly. also i want to avoid taking them shopping, unless it's grocery shopping. after watching Babies, and seeing how the western babies were so exposed to capitalism at an early age, i just thought it would be nice to try and avoid that. again try to slowly introduce them to a very capitalistic world. but we'll see.

I was struck by how much stuff the American and Japanese babies had too. But I'm always trying to find a balance between falling for my culture's worst characteristics and being afraid of change.

Twenty years ago, my grandfather had told me he hoped to be around for another decade so he could watch how the world changed.
He is no longer around, but I rather enjoy watching how quickly things change, now, with and through the perspective I learned from him.
Even if it is only in a comic booky, Back to the Future II kind of way (less five years to go until we get those hover boards!).

Where are those hover boards? And the jet packs! I want one of those too. But meals in pill form? No thank you.