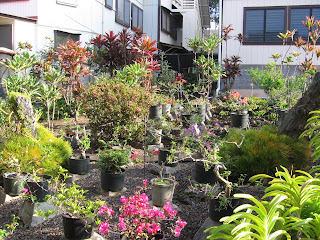 I just woke up in Captain Cook on the Big Island of Hawaii at the Manago Hotel. It’s cool and breezy, and outside our balcony window it’s green as far as you can see. There are palm trees, something I’m going to pretend is a mango tree and a talkative chicken.

Pretty idyllic, huh? But the way AK and I were feeling yesterday, you would have thought we were here to do forced labor.

We had down time between flights to Oahu and the Big Island, so we took a cab to Ono’s, a local spot Jamie recommended. And given how much time we ended up spending at HNL, it was good that we got out and took in some non-airport air…and butterfish in something green and leafy, and poi, which I was disappointed to discover I don’t like.

(It has a great glutinous texture, but it’s a texture that makes my mouth think it should taste sweet when in fact it tastes fermented. Poi is like beer pudding. I was sad because that’s my thing: traveling and liking the food that only locals like. I liked durian! But this and my dislike of macaroni salad don’t bode well for my relationship with Hawaiian food.)

It ended up being an $80 cab ride round trip for a $16 lunch. And our second flight got delayed by two hours and we were just so, so tired and grumpy by the end of it. But at least with AK, a bad day is still punctuated by a lot of good moments. I think today will be better. Because we’ll be at beaches instead of airports. 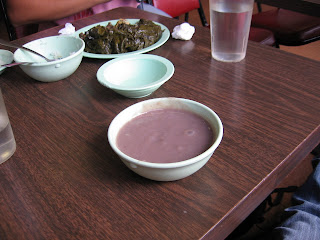 Airport delays are the ultimate test of a relationship - oh that and raising kids. Seriously I sometimes think either Kimberly or I will not survive our trip when things go wrong. She gives me this look that translates to "die now, please" and then I give it back to her. It feels like we are babysitting each other and we are both beginning to wonder what will happen if we just quit that job entirely. It's at this point that a trashy magazine can save a marriage.

You'll be ok as long as you like SPAM.

Ms. Q: We did a lot of babysitting each other that first day. Thank god for Us Weekly and the antics of Ms. Britney.

To paraphrase that bumper sticker about fishing, "A bad day in Hawaii is better than a good day (or week!) at work," LOL.
Yay for AK if she's a find-the-silver-lining kinda' gal.
You got yourself one of the good ones!

She's certainly a make-a-silly-face, bounce-back-fast kind of girl. Personally, I like to stew for a while.