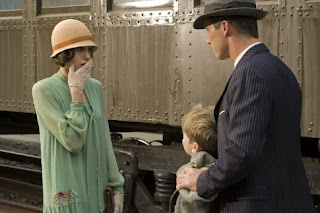 On the escalator outside the Landmark Theatre Tuesday night, AK asked what I’d thought of Changeling.

“I liked it, but I almost can’t tell if it was a good movie or not,” I admitted, “because it has so many elements that I’m guaranteed to like.”

1. Shots of 1920s L.A. Seriously, I could have watched a whole movie of ‘em—without a story, without dialogue, without Angelina Jolie. My ideal afterlife will include the ability to beam myself to any point in history, not so I can kill Hitler or whatever but so I can be a fly on the wall and find out how things really were, especially in places and eras that are close to my heart.

2. Mystery galore. Changeling is based on the true story of a boy who was kidnapped and “returned” to his mother five months later—except it wasn’t him, and no one believed her. What could be eerier and more fascinating? Throw in a police cover-up, a scary insane asylum and a serial killer with a tumbledown shack in the desert and I’m there!

3. All Saints Church in Pasadena. AK and I turned, open-mouthed, to look at each other in the dark theater when John Malkovich came on screen as an activist minister decrying LAPD corruption—because the pulpit he was speaking from was the exact pulpit where Ed Bacon, our own favorite activist minister, had stood on Sunday, probably decrying some sort of corruption (I’m not sure though, because we slept in and arrived post-sermon. This happens a lot). All Saints looked as beautiful on screen as it does in real life. The camera did not add 15 pounds.

4. Other stuff I know. Angelina Jolie’s character lived in Lincoln Heights, AK’s old neighborhood which is totally Highland Park-adjacent! And that one cop has AK’s last name, which is totally an unusual last name!

Anyway. I ultimately think Changeling probably is a good movie. Melodramatic, yes, but it’s a melodrama, complete with old-fashioned shots of Angelina Jolie looking up from beneath her bell-shaped hat at the bottom of the screen.

Thematically, it’s about how people in power don’t take women and children seriously, and since most contemporary LAPD officers probably wouldn’t say things like, “You know how emotional women are” right to their faces, it could be easy to dismiss this as a Slavery Is Bad movie—one that makes a statement that would only have been daring 50 years ago—there’s some solid evidence that police (and police states) will still go pretty far to shut someone up. Check out the story of Bronwyn’s partner’s student, Esha Momeni: http://for-esha.blogspot.com/.

This is a good movie with a good story. Angelina Jolie is good in the role of Christine Collins