an homage to my penny-marshall* future 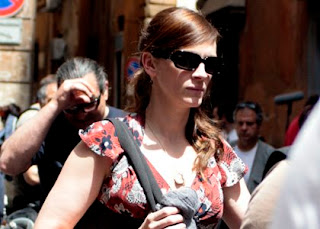 As I head into my late early thirties, I’m developing a mild obsession with actresses who haven’t had plastic surgery. When I was younger, all grownup faces looked the same to me, and that look was “boring.” But just as I’ve discovered that people over forty can do things other than make you dinner and pay for college, I’ve also learned that some of them freeze their faces into little shrines to their former selves, and some of them age.

After seeing Duplicity, AK and I had this conversation:

Me: It’s really nice to see Julia Roberts looking so great but also normal. I mean, maybe she’s had a little Botox here and there, but I don’t think she’s had any full-on surgery. And she’s skinny, but not so skinny you can’t imagine her eating. She looks like she has a life, you know?

AK: Yeah, it’s nice to see. But I’m not against people getting face lifts if they want. We do lots of stuff that’s unnatural to our bodies, so it seems hypocritical to judge them for taking it one step further.

Me: I don’t judge it either. I don’t think it’s immoral or anything—-but you have to acknowledge that it is an act of denial.

Me: Okay, so I do judge. But not in a judgmental way. I’ll probably dye my hair pretty soon. Not for fun but to deny the gray.

I appreciate the Julia Robertses and the Jennifer Jason Leighs and the Diane Keatons because by going natural (or at least appearing to), they’re putting forth the radical notion that having lived longer than thirty years is not something to apologize for.

(Of course it helps that they were all gorgeous to start with. I might age a little more like Penny Marshall than Julia Roberts.)

Back in the day, being gay used to seem really unappealing because I had never actually seen a grownup gay person whose life looked fun. So yeah, we need some old-lady role models, not closet cases trying desperately to pass as thirty when they’re fifty.

And it’s only okay to be stressed-out and dramatic and poor if you’re young and white and thin and pretty. (It’s never okay to have cellulite.)

There’s a darker, messier world in which all types of people are flawed at all stages of their lives. I was watching a young mom interact with her toddler at the store today, and I caught myself daydreaming about what a fun and kickback mom I would be, the kind whom you’d overhear saying witty yet educational things to her kid in Cost Plus World Market.

Then I caught a glimpse of my messy hair in the mirror next to the Indian jewelry display and I thought, If I’m a deeply imperfect, high-strung non-mom, what makes me think I’m going to become totally cool once I’m getting three hours of sleep a night?

I guess I want it all: the fantasy of a perfect and endless future, the semi-fantasy of beauty that results from chaos and complexity, and the reality of human fragility. But hey, it’s my birthday tomorrow. I’m allowed to have a wish list.


*No offense to Penny Marhsall. Really, I could do much worse.

I would love to fool others about my ages :-) The only thing I would be worry about being stuck on the face-- look at what happen to Elvis' ex wife, Priscilla. She was unable to smile when she was interviewed for Dances of the Stars.

Plus, my grandmother (my mom's mom) had a facial lift as soon after my grandfather passed away. She paid 25K. Ten years later, her face was back to her real age.

I would rather to spend more $$ for entertainments. Since you are facing reality, what did you get for your birthday???

Cheryl, I enjoyed this post a lot not only for the transcript of the conversation between AK and you but also because of the insight & humor. I think you are correct in claiming that our culture says, "be an enviable example of what you are." Definitely some good food for thought! Thank you.

Happy birthday! I thought I was getting it in a day early, but looks like I'm actually a day late. D'oh!

I hope you had a real groovy time.

Also, I really enjoyed this post. "Be an enviable example of what you are" --I like that sentiment a heckuva lot.

L: Yeah, there's the money thing too. Twenty-five thousand is a down-payment on a house--or I could put it toward one of those snazzy mid-life crisis cars the ladies like so much.

U: Thank you! It's good to know some folks still like old-fashioned, rambling, long-ass blog posts.

C: It was groovy indeed! And I actually wish I could get away from wanting to be enviable--I'd like to just BE--but I'm not there yet. Maybe when I'm 40.

Ah, somehow I wasn't thinking of inspiring envy in others... I took it as being the best version of yourself, someone who could be looked up to. Easier to write than do, of course.

what is wrong with our generation? it seems we're all so deathly afraid of getting older, and were so delusional. and i'm referring to me too. i have so many friends who hate getting older and think that when they have kids or do this they will be perfect at it. hahaha! i think the same thing.

i can't wait to get older. i just want to sit back and think, 'thank god that's over with.' plus i have a lot of reading to do.

i deleted my earlier comment cuz it needed editing. but this says the same thing.

I love this sentiment: "i just want to sit back and think, 'thank god that's over with.' plus i have a lot of reading to do." :-)

And yeah, it's hard not to get lured in by the philosophies and prejudices we despise. Hopefully old age will bring lots of self-acceptance on all fronts!