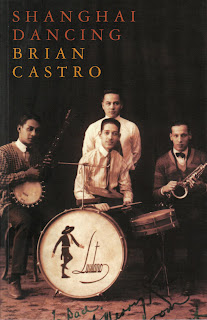 The biggest highlight of last night’s reading by Brian Castro at the South Pasadena Library was, of course, Brian Castro. He read a lyrical, dreamy (yet kind of action-packed) excerpt from his “fictional autobiography” Shanghai Dancing against a backdrop of old photos, some from his family’s days in China, some he found out in the world. It was lovely, evoking an old black-and-white movie somehow.

My CalArts buddy Colin Dickey interviewed him afterwards, and I decided that Castro might be one of the most dignified and thoughtful writers I’ve met. When talking about the not-so-easy process of getting his work published in the U.S. (despite winning gobs of awards in his native Australia), he said, “I’m quite comfortable and proud to say that I’m a writer who belongs with a small literary press.” I was like, Hey, yeah, me too! I very much wanted to be in the good company of Brian Castro.

Nevertheless, the second biggest highlight of the evening was the drunk and/or schizophrenic gentleman who stood at the back of the room—he was kind of a heckler, but a supportive one. While the 16-year-old Alhambra High School student who opened for Castro played (beautifully) some type of traditional zither instrument, he strummed along on his air guitar. Air zither? At the end of each song, he would clap loudly and yell, “Bravissimo!” or “That’s the Chinese national anthem!” (I’m pretty sure it was a zither arrangement of “Somewhere Over the Rainbow.”)

“Do you think he’ll lip sync along to Brian’s reading?” I whispered to Patricia of Kaya Press, who was ushering Castro around the country on his U.S. tour.

“Maybe a little call and response,” she whispered back.

Which he pretty much delivered on until the cops came and took him away.

Crazy just makes everything more fun, in my experience.

Ha ha! I'm sorry I missed this! And I'm glad I'm tuning in - how wonderful to see the lovely cover of Lilac Mines! I look forward to fan-geeking out on your ass and asking you to autograph my copy.
;-.

I would be honored to count you among my fan geeks. You will be in the good company of my dad, sister and AK.

I caught him at Book Soup. He was a little drunk--entertaining!