three paragraphs about three stories about ghosts and aliens 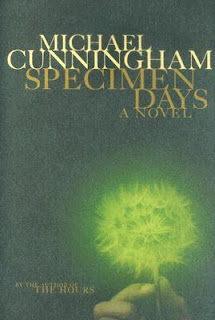 There was a time when I posted long, muse-y book reviews on this blog, and while they never garnered as many comments as my bitchy recaps of The L Word, I, for one, liked them. I’ve gotten lazy lately, and just posted short little thumbs-up/thumbs-down blurbs lifted from my Goodreads/Facebook reviews. While there’s arguably something to be said for brevity, especially on the internet, some books are just so damn good they deserve three whole paragraphs. (And perhaps a dissertation or two, but that’s not the business I’m in.)

So here are three paragraphs about Specimen Days by Michael Cunningham:

1. This is the kind of book I like: While Michael Cunningham is such a linguistic genius that he can and has made baking a cake seem like the most beautiful and meaningful experience in the world, in this book he takes crazy-ass risks and writes about ghosts and aliens. More specifically, he tells three stories with recurring motifs and characters set in three different, difficult time periods: the sweatshop-ridden late 19th century, the post-9/11 21st century, and a post-colonization-of-the-planet-Nadia miscellaneous future century. I’ll always take an interesting, flawed book over a predictable, perfect book, but this one is interesting and very close to perfect.

2. This is a book about the triumph of the human spirit, except Cunningham sort of explodes the idea of “human.” Specimen Days is concerned with what happens after we die, and how thoughts about such affect the way we live—as I imagine many New Yorkers were shortly after terrorists blew up pieces of their city as part of a holy crusade. Weaving in bits of Walt Whitman’s Leaves of Grass, the characters in Specimen Days conclude (or so I interpret) not just that we die and become grass, but that life is death is life. One big, beautiful, scary machine. Hence their actions are alternately/simultaneously life-loving and suicidal. Love is so big that it has no time for silly notions about the difference between life and death or man and machine.

3. In the third story, an android named Simon doesn’t exactly long to be a real boy, but he does hope that his inventor can explain why—despite being human in a zillion ways—he feels a disconnect with the world around him, a sense of always grasping for an idea or emotion he can’t quite wrap his head around. Having heard Michael Cunningham speak a couple of times, I know he’s fond of talking about how all writing is an act of translation—from the big ball of passion and fire in your head to the inadequate little words on the page. What Simon doesn’t realize is that this is what life (and maybe even a relationship with God, God being a sort of abstract Walt Whitman scattered throughout the universe) is like too: always wanting, always grasping, learning to love that process and all its imperfect fallout.

Okay. You got me. Will have to read this one. Maybe this will be my book for Ireland.

Cheryl, Cheryl, Cheryl. Hearing you discuss a book is amazing! Your passion always inspires me to strive to read more, but I feel like I'm missing soemthing...a gene perhaps...that you have that I wasn't born with. I'm not hopeless, I just don't compare. (I'm not currently wearing a hat, but if I was I'd tip it to you.)

J: The cover is kinda green.