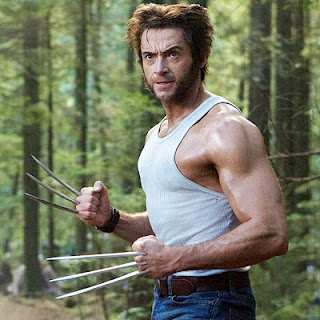 What a lovely weekend. Relaxation ruled with an iron fist, though it took us a while to submit to it. We got to see Lee-Roy and his beautiful sketches in I Am That Girl, which screened as part of the L.A. Asian Pacific Film Festival. It’s nice to see truly independent (as in financed by the director’s friends and family, not Miramax) movies get some screen time. This one had some bumps but also great characters and a compelling story.

On Saturday we saw what you can do with an extra $100 million or so, which is: make steel claws grow out Hugh Jackman’s hands. It was a fairly well-spent $100 million, I’ve got to say, as long you don’t get hung up on details like, Wait, why are Wolverine and his brother feuding? And why are Liev Schreiber’s long pointy fingernails a super power? I have funky-looking thumbs—can that be a super power too?

I’m writing about mutants myself right now, and it was instructive to think about the rules stories create for themselves when they break the rules of the universe we know. Also how mutants always seem to lead this tortured—but special—but threatening to the status quo—but kinda sexy—existence.

Sunday AK and I dusted off our bikes and rode to Buster’s in South Pas, where we ate ice cream and sorbet, and I tried to block out the improvisational jazz happy-hour thing they had going on. Sorry, I’m just not smart enough to like improvisational jazz. AK and I decided it was the musical equivalent of language poetry—I can appreciate it, but, if possible, I like to politely excuse myself from it.

But it was a really nice afternoon. I think I could even be more open to language poetry if I had a bowl of ice cream in my hand every time I read it.

No doubt about it - mutants are pretty hot. Although I guess we don't see too many movies about mutants who don't have any superpowers to speak of, but just have three eyes and a tail. Less hot, to be sure.

Probably because that movie would be less about saving the world and more about awkward dating scenarios. Although I would totally see the "guy with a tail goes on a date" movie if the tone was right.