what else i read in october... 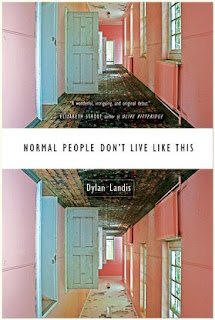 …besides those circus books (not that I’m done with the circus—I saw Cirque du Soleil’s Kooza last night and am wondering if it’s possible to become a contortionist when you’re 32 with a bad back. If not, I’d settle for becoming a stilt tumbler, because apparently such things exist. That’s right: tumbling on stilts. Like the Olympics but more bad-ass and with cooler costumes).

Oh, right. Back to books:

Normal People Don’t Live Like This by Dylan Landis: I tore through this book in the same manner I devoured Prep--something about my apparent hunger to see an angsty female adolescence given literary weight. Landis shines her considerable literary light on moments and images: for example, the care her bisexual protagonist devotes to touching a pregnant friend's wrist rather than her stomach. It's a book of rooms (the mother character is a designer, so this is both literal and figurative); there's sturdy architecture here, but it's often masked by a beautiful set of curtains. Very occasionally I wanted some of those offstage plot points to get bigger play (what? Leah's dad died? when did that happen?), but mostly I was happy to revel in the details.

Spook Country by William Gibson: I think my appetite for near-future fiction is waning. The three main characters in this novel--two of whom I liked quite a bit--are all accidental spooks, sent on covert missions they know nothing about. Maybe we live in a world of high-tech disorientation, but I didn't love reading about it. I liked Gibson's mini essays and flights of fancy about the potential of art and technology (example: a site-specific hologram-ish reenactment of River Phoenix's death), and this is the rare book in which the beginning and middle drag, but the ending pays off (without giving away too much, I dug Gibson's notion that not all shadowy conspiracies are evil). But oh how I didn't enjoy the ride.

The Thing Around Your Neck by Chimamanda Ngozi Adichie: At first I thought the stories in this collection might be a little too perfect and New Yorker-y, with more craft than heart. But I quickly fell in love with Adichie's characters, many of whom are women navigating between worlds or defying male domination in creative ways. Though they sometimes suffer under the customs and corruption of their native Nigeria, none behave like victims, and the West is not without its own sexist assholes, like the English writing workshop leader who constantly tells his African students that they are not accurately representing Africa. It's a brilliant, painful (especially if you're a writer) story-within-a-story, possibly within another story. I also loved the shy gay Jehovah's Witness neighbor in "The Shivering." He was a little like this book--quiet, but it gets to you.

you must be a fast reader. holy cow!

It's all about books on CD, which AK (somewhat jokingly) claims are not real books. So technically I read three, listened to two.

Weren't those three women huh-MAZING?
I adored the ring master in his natty striped suits, with his expert dancing, non-verbal ways.
The other ring master/emcee looked like Burger King.

Yeah, I loved the stripey ringmaster too. SUCH a good dancer. I had a lower tolerance for Burger King and his sidekicks, but I still appreciated that they represented clowning at its best.