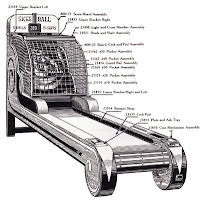 I’ll let you in on a secret (which is maybe not so secret). No matter how much you like poetry (some people do, you know), if you go to a reading with four featured readers, chances are there will be a weak link. During one of the readings, you will be thinking about what you will eat when you get home or what you will wear tomorrow or how to make your own work the non-weak link, if such things are in your control.

Not so with last night’s Light the Sky reading at Eagle Rock Plaza. I went to see Jamie, but William Archila, Lory Bedikian and Rachelle Cruz were icing on the cake, or foam on the cappuccino, since the new series takes place in a coffee shop.

Which is in a mall. Which blasts muzak from all orifices. Isn’t the whole point of muzak to be unobtrusive? But while the poets had their work cut out for them, I didn’t have to fight to concentrate at any point.

Jamie read a bunch of new stuff—including a poem called “My Lover’s Ex-Lovers” that she sweetly blushed her way through—celebrating the end of the dry spell she’s been talking about for quite a while (that would be a writing dry spell, not a dearth of lovers, you dirty-minded people). I was so happy for her—I could almost feel the energy radiating off her, and it made me want to sit down and write too, which was a nice reminder that inspiration, like love, tends to multiply when divided.

Rachelle Cruz is writing a series of poems based on a mythical figure from the Philippines, a woman whose upper body detaches and floats around at night sucking the fetuses out of pregnant women. In Rachelle’s story-in-poems, the woman goes to the St. Louis World’s Fair in 1904. You know, just to check things out. It was such a brilliant idea, I really wished I’d had it. But taking it would be kind of like sucking the fetus out of another writer.

The mall was anchored on one end by a Target, which is where AK and I held our after party. So in addition to inspiration, I also went home with a new Anna Sui for Target vest, an Anna Sui for Target tank top and several plain old Target for Target basics. Say what you will about malls, but it’s nice when you can get your art fix and a large plastic storage bin in one place. And if I’d wanted, I could have capped the night playing skeeball at Chuck E. Cheese, which was right between the poetry zone and Target.

Makes me think of Tiffany's mall concerts back in the 80's.

I love the idea of poetry in unconventional places. Kind of like San Diego's Trolley Dances.
http://www.epiphanydance.org/

Okay, I'll admit I first read "dry spell" as "alone time with your right hand" LOL. You know your reading audience well! :)
I'm in my forties, and my enjoyment of whacking plastic moles may never decline, even if my skill level does.

MP: I love that stuff too. I was sad to miss last weekend's Janet Jackson flash mob in L.A.

OMG, this is what I get for reading your blog in big spurts (usually when you're not in the office... it kind of replaces you :D). Thanks for the kind words. I, too, went on an Anna Sui for Target shopping binge a few weeks ago and messed up my whole year-end budget!