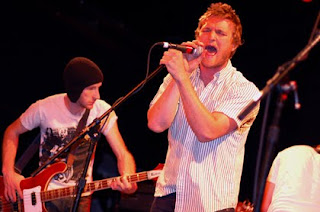 Concerts have recently been something of a bone of contention between AK and I. It would go like this: She’d troll blogs and mailing lists and find a show she’d want to see. I’d agree to go with her because 1) in my mind I’m a fun-loving gal, 2) I probably dragged her to a so-so poetry reading recently and 3) she has a very cute, convincing face.

But come the morning of the show (which would inevitably be on, like, a Tuesday because that’s when the cool kids go out), I’d stubbornly wake up at seven and write as usual. Then, after work, I’d race to get to the show and stand through it bleary-eyed, counting the songs, grumbling about my lower back problems. AK would scowl at me and the world I symbolized: the world that Never Felt Like Going Out.

I can’t report that we’ve solved this problem, but we’ve come to a tentative yet healthy compromise, which involves me giving her an iPod Nano for her birthday (I know, it sounds like a guilt Nano, but it wasn’t) so she could invest more deeply in non-live music, and AK only inviting me to really important shows and/or shows with chairs.

Friday night’s Cold War Kids show at the Wiltern was both, and it hardly felt like a compromise at all. Because:

3) Cold War Kids is a great band. I knew this from their previous albums and shows, but their Wiltern gig, during which they played a handful of songs from their new EP Behave Yourself, drove it home. The songs are so catchy that when you’re listening to one, you think you’ve heard it before, and that it’s your favorite song. They’re poetic and haunting. They tell stories. They feature unpredictable instruments.

4) Cold War Kids is not averse to talking about their songs. The lead singer periodically introduced songs by saying, “This one’s about how schools squash creativity” or “This is about Long Beach, where we’re from.” So when you watch the video of the Blue Line scrolling by in the background, you know why it’s there. I like a band that has something to say, and owns up to it.

5) Videos. Since I’m not one to study a guitarist’s technique, I like something to look at. Ideally, this would be dancers, but video imagery is a good substitute.

6) At one point the lead singer gave a shout-out to all the kids he’d substitute-taught in the Whittier and Torrance school districts. I whispered to AK, “I bet Vampire Weekend never had day jobs.”

We’re going to see them in April, so I’ll let you know.

All musicians have had day jobs. It's a crucial part of the whole aesthetic.

I agree, but I keep hearing/reading what preppy WASPs Vampire Weekend are.

Vampire Weekend absolutely did not have day jobs! They were like freshly minted 21-year-old Columbia grads when their album went big. And, Cheryl, you said not to buy the tickets. It was on a Tuesday night or something.

Well, I'm just a sender of mixed messages, aren't I?

In fact, FYI, at least one of the members of VW* was Still in School when the started to receive a lot of attention. (At least, I believe that's right.)

(gonna try and visit here - doesn't take up so much bandwidth so I feel okay about that. CC, what's yours again?)

I have such envious resentment of any artist who hits it big (or even big in a small way) before graduating. So I tell myself it's THEIR LOSS, as they lack the fabulous life experience that I have gotten via data entry and wrestling with fax machines.

Thanks for stopping by, Alberto! It's good to hear your voice/typing.