what i read in december 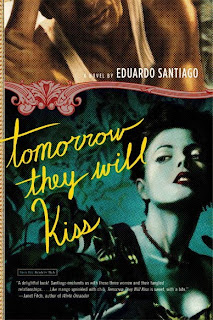 You’re probably sick of lists and reviews by now, even though the latter is allegedly what this blog is mostly about. Lucky for you, I didn’t read much in December. I did a lot of…what did I do? Eat? But reading while eating is one of my favorite activities, so the presence of food doesn’t explain the lack of literature. Shop? Probably shop. Ugh. I am all shopped out and am now enjoying the ascetic feeling I associate with January: light eating, minimal spending, indulgence of my puritan work ethic, and a clean, fresh blanket of snow over the place where the Christmas lights used to be.

No, there is no actual snow, but if I were to create one of those inspiration collage thingies that designers use, snow would be on it.

And now, my two-book roundup:

Tomorrow They Will Kiss by Eduardo Santiago: Like the heroines of the telenovelas they love, the characters in this book (three women from the same gossipy village in Cuba, now working in a New Jersey doll factory) are painted with somewhat broad strokes, but they're each more complex than the others think. And, also like novelas, their stories are pretty addictive. Santiago has created a great, classic diva in Graciela, a bad girl with a heart of gold. And when her bitchy "friends" relentlessly try to take her down for such transgressions as daring to take fashion design classes, Santiago shows how suffocating small-town life can be, so much so that it can follow you across an ocean. But of course Graciela's not one to be taken down easily, and for that you can't help but root for her.

The Wonder Spot by Melissa Bank: I think AK summed up this book and its place in the world better than I could. So, to quote her: "Curtis Sittenfeld gave it a terrible review and called it chick lit. But it does a lot of the same things that her books do. True, The Wonder Spot doesn't go quite as deep, but it's also much funnier."

The Wonder Spot is chick lit in that it's about an upper-middle-class woman's work and love life. If only all chick lit were so funny and thoughtful, so free of obvious prince charming plots and covers featuring pink stilettos.

I once asked you about what type of blog entries got more hits or feedback and you told me that though one of the intentions of your blog was to review books book reviews were on the shallow side of the popularity pool. I know why now. I do read your reviews, but, what do I say when I have not read or sometimes never heard of the book your reviewing? Waa waa for me. (Thought you'd like to know.)

It's true, it's hard to leave a comment other than, "Hmm, sounds interesting." I'm actually quite comfortable with posts that don't get a ton of comments, but I wonder if I should go back to doing more of what I used to, which is combine review/life posts rather than segregate them. This blog is against segregation!