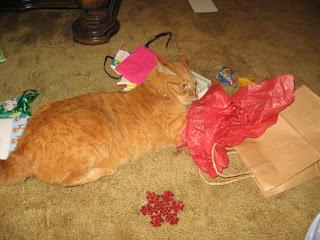 This morning my dad had our family cat, Eliot, put to sleep after it became clear that his kidney problems were going to get him sooner rather than later. I was sad that my dad told me this after the fact, because the Kleins have been together for all other pet euthanasia. Eliot was the last pet who knew my mom—they spent many hours napping together when she was sick—and Eliot’s absence feels like one more way she’s not in the world.

I also want to give Eliot his moment: This isn’t all about my mom and vague feelings of familial distance. I’m going to miss Eliot himself, a slight orange tabby my dad referred to as “you useless cat,” usually while scratching him lovingly on the head.

When we adopted Eliot my sophomore year of college, he was a year-and-a-half-old cat named Gonzo, recently returned to the rescue organization because he hadn’t gotten along well with his previous family’s other cats. My dad, a sucker for orange tabbies and full-grown cats (kittens being more or less furry little balls of advertising), was sucked in.

Eliot remained an only cat at our house but developed a charming buddyship with Niko, the elderly Siamese across the street. My dad took to leaving breakfast on the back porch for Niko every morning. I used to wonder how Eliot would fare once Niko was gone, but now I wonder how Niko will do.

Eliot was on the prissy side—he lined his litter box with dryer sheets he found in the garage, although he didn’t have much use for fancy cat food, which may explain part of the reason he earned a place in my dad’s cheapskate heart. He was a talker—not a yeller/whiner like OC, but an utterer of matter-of-fact meows repeated at frequent and regular intervals. He jumped off the second story deck twice. He liked opening presents and eating tapioca pudding.

RIP, Eliot, and say hi to Mom for me.

so sorry about your cat. my 20-yr old cat died two months ago, i know how much that sucks. i miss her almost as much as i miss my own mother, who also died. i love your cool memories of eliot, and your presence of mind to write them down. great post.

No pet could have a more fitting tribute than your the eulogy you gave Elliot here.

Maybe more your mom's strokes of creativity can continue to be renewed - like the mermaid.

Also you should consider starting a pet-eulogy-writing-service.

:*(
To continued new and creative energy, both in this life, and in the next one with your mom and Eliot.

OH I'm so sorry! I personally know how it feels. I had lost few cats: Baby Cat, the smartest cat, Domino, the macho cat, and Bandito (probably gay, but that's okay), and few other cats.

I'm sure that Eliot opened all of your Christmas presents before you had a chance to open it up. Trust me it leaves me wonder about the Orange Tabby cat because Stars like to rip and chew anything is paper, just like Eliot.

I am sure that Eliot will be happy to reunite with your mom.

Thanks, everyone, for all your sweet comments. You guys are the best.

I'm sorry to hear about Eliot's passing. You've given him a very lovely and touching tribute and he gave you sweet, sweet memories. :D

I'm so sorry for your loss. My favorite cat had kidney problems when she was younger and I was so worried and just cried all the time. She seems fine now and hopefully remains fine. I lost a cat to kidney failure last year and now another cat I know has kidney problems. It's so heartbeaking.