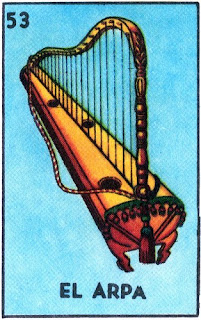 I’m between drafts of the so-called circus novel right now, and I’ve been working on a couple of short stories. It’s weird. I hadn’t attempted a short story as more than an exercise in a long time, and I was halfway convinced that my writerly identity no longer included the ability to write anything less than 200 pages. Even when I read short stories by other people, they seemed kind of sneaky and pretentious. Like they were trying to be a flashy, fabulous first date but couldn’t sustain a relationship.

But then along came two invitations to submit stories (I know! I love feeling loved like that), and suddenly I had a mission, which is all it’s taken to get back into short-form fiction. One story is about Prop. 8 and the Santa Clarita Valley and coyotes. One is about a harp and a mysterious mother-in-law.

Now I’m a little bit scared: What if I abandon novels? Novels are who I am. But when Jamie put poetry aside for ballet for a few months, I was like, Go with it! Listen to your muse! The problem is, I wasn’t raised by a muse; I was raised by two Very Responsible humans who believed in sticking with things, who viewed too much change as flaky and suspicious—a flashy first date.

And to an extent, that’s true: You can’t write only when a gorgeous, angel-winged muse is sitting on your shoulder. That bitch always plays hard to get, and you’ll make yourself miserable if you wait around for her.

But putting on blinders and chaining yourself to your laptop isn’t always the greatest alternative. So my other mission is to be as open-minded as I advise others to be, and as I witness successful artists (or successful anybody) being.

Knowing the circus novel as I do, I think it wants me to see other people when we’re apart. I’m sure it’s hooking up with an unexpected plot arc as we speak. At least I hope so—I want it to come back to me skilled and worldly, with a few new tricks under its tent flaps.

The circus novel is not like a human child that will starve if you neglect it for weeks on end.
Maybe it's more like a cat that will be pissed off at you when you come back from vacation, but only for a day or so.

Exactly. Maybe I need to be thinking in terms of pet analogies.

That got a little metaphorically saucy there at the end. Which made me laugh, which is always a good thing.

From what I've read about the business of writing, novels are more profitable than short stories, though, of course, individual mileage varies.

All that aside, abandoning novel writing for short story writing does not sound flaky or suspicious because they're both still writing. Course in my eyes, you could take up anything for a few months & I'd just consider it a new source of writing material for you. :) Or if you kept with a trapeze act or whatever and were happy, that'd be excellent too.