a blog entry about the lakers: who knew such things were possible? 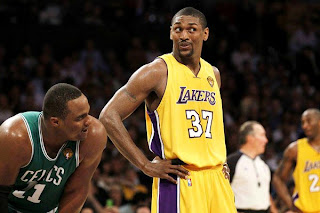 Since I spent Wednesday night unleashing my recent brand of crazy on AK, I decided Thursday night we could do what she wanted to do. She chose the Laker game followed by food at the York. I have never knowingly, willingly watched a televised sporting event that was not the Olympics, gymnastics or ice skating. I went to a Super Bowl party once, but I was really focused on the chips and dip. I may have caught a few minutes of baseball at AK’s parents’ house, but I’m sure I was putting together tomorrow’s outfit in my head, which is what I do when I’m bored.

So it was a big deal to knowingly, willingly watch the last twelve minutes of the Laker game and actually pay attention. At first I was all about the Celtics’ green sneakers and retro headbands, but then AK started telling me more about the players’ seasons and lives. I started watching the expressions on their faces (thank you, big new TV!) and the very close score at the bottom of the screen. I started to feel a peculiar sensation in my chest, one I definitely never experienced during the dozens of live basketball games I endured as a high school cheerleader.

When crazy Ron Artest with his pretty eyes gave a post-game speech in which he thanked his psychiatrist (and, okay, plugged his forthcoming single), I was virtually verklempt. People could be a little nutso and bounce back and do great things! Maybe there was hope for me yet! Maybe today’s punching-of-fans is tomorrow’s championship!

We walked around the corner to the York, where the game had already clicked off and the bar was back to its usual ironic background fare, in this case classic Felix the Cat cartoons. Although I would take cartoons over sports any day, I’ve never been into the old slapstick stuff. But another discovery awaited me: Felix was cleverly drawn and hilarious. It didn’t hurt that, as a naughty black cat with a blunt tail and a wheel of ever-changing moods, he reminded us a lot of Ferdinand (Ferd, you muse of the silver screen). I’ll say it again: Maybe there’s hope for me yet.

Man, you and I are so IN SYNC! Great post, as usual.

I, on the other hand, was teaching class, during which more than a few of us were checking our Blackberries or laptops to follow the score. But we knew the Lakers had won by the eruption of car horns and the volley of gunfire coming from the neighborhood.

"I have never knowingly, willingly watched a televised sporting event that was not the Olympics, gymnastics or ice skating."

Next up: World Cup! Cross your fingers the US advances, and I'll take y'all out for the game.

A: Thanks--we're so in sync we could start a boy band!

TW: I do love that feeling of L.A. connectedness...you know, as long as the bullets don't land anywhere problematic.

Ha ha ha ha! Very funny post.
“your sports heart just grew three sizes today.”
Does that mean that you (and people like me and Prince) are a sports Grinch?
:)

Never thought twice about the Lakers the whole time I lived in LA, but I tuned in for the last 15 minutes of the game and was SO HAPPY to be rooting against Boston (where I now live) and its legions of irritating fans!

Are they the Massholes I keep hearing about? Laker fans aren't known for their decorum either, but I've been finding them kinda charming.