in n out of africa 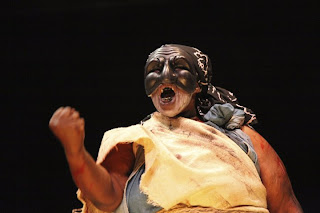 Alberto, Emily, AK and I were all set to see Break the Whip at the Actors Gang Saturday night. AK and I had tried to see it during its first run but sold our tickets when our movie club decided to meet that night (that’s how much we love you, movie club). Apparently, though, it’s just not in the cards for us to see that play.

The freeways were clear and the parking structure was cheap and easy, which in L.A. means the night is off to an amazing start. We got to the theater early, and because we’d signed up for the reserve section, which was miraculously the same price ($8! Half the price of Dodger Stadium parking!) as general admission, we lingered outside the Ivy Substation and enjoyed the cool summer night.

But as soon as we were done basking in revitalized Culver City goodness, we discovered that, oops, they’d oversold all those reserve rows.

Suddenly we and a handful of other theatergoers were at the center of a storm of stressed out staff members scrambling to turn a 99-ish-seat theater into a 115-seater. Alberto is a smooth talker and Emily is a middle school teacher, and they’d both just spent eight months injecting infrastructure into a school in Tanzania, so this seemed like no problem for them.

“I had like three phone conversations with someone named Sienna,” Alberto explained. At one point Tim Robbins himself tried to help out. (I totally didn’t recognize him, but Alberto, who did not lose all his L.A. cred in Tanzania, did.) But when the “solution” turned out to be pillows in the aisles, we decided to cut our losses.

The staff was really apologetic and, knowing how hard it can be to get people to frequent indie arts in the first place, we were sympathetic. “You know whose weekend really sucks?” I said. AK and I agreed: “Sienna’s.”

2. if alberto and emily can’t fix it, well, maybe some sort of global thought revolution can

We ended up at the In-N-Out across the street in non-revitalized Culver City. We all got milkshakes and some of us got fries and grilled cheese. We’d seen Emily and Alberto a couple of times since their return, but mostly we’d talked about how they were settling back into L.A. life—they’d rented a house with a pool a few blocks from us, which seemed like an excellent start. Until Saturday night, all they’d really said about the school in Tanzania was, “It was kind of like telling a friend you’d help them move, and when you show up on moving day, you discover that they haven’t even put anything in boxes yet.”

It turned out to be a perfect assessment. As Emily and Alberto told us about demonic possessions among the female students and the local staff’s Crucible-style reaction, the gap between the West’s idea of What Africa Needs and its understanding of what the problems actually are never seemed so clear. I was impressed by how Alberto and Emily had devoted themselves to actually understanding and addressing those problems, and saddened by the enormity of their task. “People need to rethink the aid model,” Emily said, echoing Bronwyn, my other friend who spent a lot of time in Tanzania—who’s now against romantic lend-a-hand trips and pro write-your-congressperson.

“We want to write a book about it,” said Emily, who’s usually as upbeat as you would expect your favorite teacher to be, but now had a sort of sixth-period-on-a-Friday-in-June look on her face. “But first I think maybe I need therapy.”

Sometimes when civilian friends say they want to write a book, I’m kind of like, “Um, okay, I guess you’ll find out whether you like writing or just had something interesting happen to you.” But some things are so interesting they have to get out, and be a counter-voice to the romantic lend-a-hand narratives. And Alberto is a writer already, so they should be up to the task. I know I’m in line to read it.

We went back to Alberto and Emily’s place and flipped through his new collection of DVDs bootlegged by way of China and Dubai. Suddenly the need to rethink the copyright model also became abundantly clear. But that’s another book. AK and I borrowed a copy of Away We Go, whose cover was stamped with Chinese characters and, inexplicably, more pictures of the girl who plays Maya Rudolf’s sister than Maya Rudolf herself, and away we went.

I would stand in line to read that book.
And it sounds as if Sienna could also use some therapy after that weekend (couldn't we all?).

We'll stand in line together at B&N at midnight when it comes out. It'll be like Harry Potter, but more depressing.