making it work, working it

“What do you wear when you want to look like you don’t really care about looking good but could if you wanted to?” I asked AK.

Veronica had invited us to the last night of Fashion Week, where she would be modeling in the Kucoon show. I love fashion, but it’s hard to tell because I devote almost no time or money to it. I’m like a person who thinks she likes to read because she enjoys Oprah’s book club segments. I read a lot of fashion magazines—so at least I could point to a page that said slouchy jeans were back when AK became insecure about her pants.

I ended up wearing jeans that were neither trendily slouchy nor trendily skinny (Target, $20); a dark orange wife-beater (Nordstrom clearance rack, like $12); a blazer that my friend Daisye had sewn patches on (random thrift store in Tacoma, $10); and silver Jessica Simpson pumps (DSW, $18).

With the exception of Daisye’s handiwork, all were fairly embarrassing items, but once we got to the downtown warehouse where the shows were taking place, it became clear that I could have put almost any five pieces of clothing from my closet on at random and called it fashion. Although, again, I realize this is like looking at a Picasso and saying, “My five-year-old could do that.” 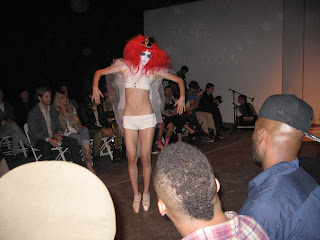 People in line were wearing emo jeans and ‘80s jeans, T-shirts with sequins and T-shirts with giraffes, ankle booties and checkered Vans. There was a girl in a pink mohawk and a black lace cat suit, and a guy in a big-shouldered sequined dress that, until that moment, I could only have imagined on a Cambodian mother of the bride. Another guy appeared to be dressed as the czar of Russia. 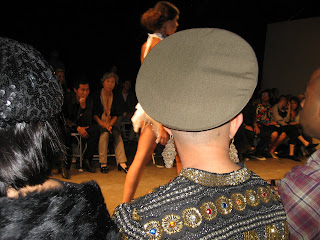 Even though Veronica had put us on the list, it seemed ridiculous to push my unfashionable size-nine self to the front of the mob and say, “I’m on the list!” Especially when my whole look was I Don’t Care About The List.

My instincts were correct because we soon discovered that everyone present was on the list, and The Girl With The Clipboard maybe didn’t totally have a system for letting people in in an orderly fashion. The longer we hung out, the more authoritative we became, until after a while, we were telling people in outrageous outfits, “Actually, everyone here is on the list. You’re just going to have to wait.”

We befriended a fellow non-fashionista named Kacie, who bartended at a bar called Casey’s, and chatted with her until the magical moment when the clipboard gods waved everyone in for the 10 p.m. show.

AK had forgotten her ID, and after watching a pleading exchange between the bouncer and a teenage girl whose sister was in the SHOW!!, things didn’t look promising. But it was the end of the week and the guards must have been tired too because soon the girl was in and so were we, and AK had a big mischievous grin on her face. She has this kind of luck and she knows it. The Kucoon show began with a gaggle of dancing girls in white body paint, white hot pants and tube tops, and giant red wigs. They were cool, but I was like, These are the fashions? They’re kind of just white underwear. Then Veronica came out—also white and wigged—and danced on pointe, ballerina meets alien robot doll.

And maybe I’m biased, but she totally stole the show. A lot of the models that would follow were pretty or edgy or interesting to look at, but none looked quite as natural and happy to kick your ass as Veronica did.

So yes, it turned out that the red-wigged dancers were an opening act for a full collection. I liked the clothes that paraded by on models with Swiss Miss braids and heroin addict eye make-up—lots of jersey hoodies and dresses with pleats in unpredictable places, plus a few explosions of plaid—but some of them had a slightly flimsy look. Maybe that’s just what fashion looks like up close, though.

The show closed with a trapeze artist twirling on a giant piece of stretchy fabric that I think they call the tissue. It was mesmerizing (you know how I feel about the circus arts), but when the girl got down and danced offstage with the models, she suddenly looked a little Burning Man/Age of Aquarius. Leave the dancing to Veronica, I thought. She knows how to merge all these worlds.

The evening was nothing like a New York fashion show, by which I mean it was nothing like the fashion shows I’ve seen on Sex and the City, The Real House Wives of New York City or in The Devil Wears Prada. It wasn’t a bunch of socialites deciding what they’ll wear next season. I know L.A. fashion is considered rinky-dink, but that seemed to free people up to dress in other-worldly costumes and act as fierce as if they themselves were on the catwalk/strip-of-warehouse-floor-between-the-folding-chairs. So maybe a little streak of Burning Man isn’t such a bad thing. 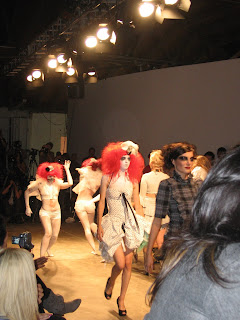 I've always thought that there should be an extra 's' in that word, because 'fASShion' is so wonderfully riDICKulous most of the time.
And "Kacie who works at Casey's?"
Fab-AB-ulous!

sounds like fun. I think I pretty much have the same relationship with fashion as you although with less magazines and probably more overall grunge.

Still, I can say things like, "If I ever get married- and in a dress- I'd want a red one by Narciso Rodriguez."

PV: Thank god for fasshion in all its ass-y-ness, right? I so prefer it to the ass-y-ness of the election right now.

the last fashion show i was in was a fundraiser for burningman.

no, i don't know why they need to raise funds after charging hundreds of dollars for admission.

i'm so glad you both were there and had a good time - we can go see the czar of russia's art show next week if you like (randy) or go visit the pink-dreadlock-mohawk girl's gallery (and the piece she was in was by kucoon and on the runway that night but i think it looked best on her :) !)

I am so jealous - FIERCE!

V: I can't believe you know the czar and the mohawk girl. They are like celebrities to me now.