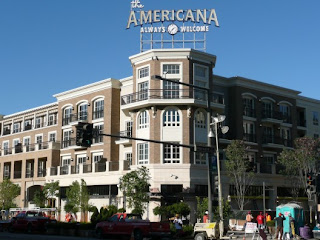 If the Americana at Brand’s location weren’t built into its name (“Where is it?” “At Brand”), it would be very easy to forget you weren’t at The Grove at Third. I don’t know if they were designed by the same person (though I bet Scott does—more on him soon), but if not, I’m willing to bet the designers dated for a long time. And on their dates, they discussed how cool it would be to build a big outdoor mall that tries to pass as a town square and features a big fountain, a trolley and an Anthropologie store.

I visited the Americana for the first time Sunday for a SoCal blogger meet-up organized by Prince Gomolvilas of Bamboo Nation. It wasn’t quite on the scale of TequilaCon, but at $4.70 for delicious almond-fig gelato at Caffe Primo plus a couple of bucks for gas, it was cheaper.

I arrived a little nervous: Some of these people would know me only through my blog, meaning one of two outcomes could occur:

1) They would leave thinking, Wow, she’s way funnier and more interesting on her blog, meaning that my in-person personality is so-so.

2) They would leave thinking, Wow, she’s so much cooler in person, meaning that my writing is so-so.

But most of them didn’t know me or my blog, which meant that it was all one big cold call, which didn’t exactly put my mind at ease.

After securing salads and gelato, we took turns throwing out questions to the group and answering them by going around in a circle. Stuff like: “What do you censor on your blog?” and “What’s your magic post that has gotten a zillion hits?” and “Which application do you use to track statistics?”

I called AK on my way back to the ridiculously glamorous parking structure (there’s a chandelier). “It was really fun to meet everyone,” I said. “And they were all really cool—our conversation wasn’t nearly as geeky and awkward as you might think this kind of thing would be. Or…wait…maybe this just means I’m so immersed in this particular brand of geekiness that I can’t even recognize it.”

But if it’s geeky to gush about blogging for two hours, I don’t wanna be cool.

The Grove and The Americana were both indeed designed by the same person and intended for people not like us. That's why we like it. We're rebels. Blogging rebels.

Brand in Glendale? It's only been 5 years since I've at least visited LA and it keeps on changing. Without me. Sniff.

You basically hit on all my anxieties about blog meetups. Course due to location, I've only done 1 with Neil and Sophia-citizen of the month.

Also, I feel a little more unprepared because I blanked on my stat counters (one which is just called StatCounter- gah!) and I don't really have a zillion hits post. Perhaps the CU photo of the hole in my old cutoffs plus a small piece of leg. What's yours? (Or should I save that q for some coastal/traveling/TequilaCon alignment?)

Glad you had a good time!

PG: I do love me some gelato, and the soothing, buttery light of retail.

C: I don't have any zillion-hit posts either (nothing like Prince's hot-button High School Musical posts), but I've gotten an odd amount of comments on a long-ago post about a local traffic reporter. Go figure.

2)Your blog: still fabulous.
1)You in person: WAY fabulous! (loved your wrist wreath ink)
It was rather blind date-ish, yes?And I was thrilled you were in attendance.

Yes, it was one of those rare blind dates that turns out really well. Thanks for bringing and blogging your own fabulousness!

Rick Caruso, Caruso Affiliated, built the Grove. It was a relatively new take on single-ownership outdoor shopping and open air malls back when originally developed, with elements of Disneyland and lifestyle retail. The Grove has probably the highest performing Apple Store in the country. It is also rumored that the Grove has more visitors per year than Disneyland!

The Grove was such a success that Caruso attempted to duplicate it at Americana. Becuase so many visitors to the Grove also said that they wished they could live there, Caruso integrated housing into Americana. He's also busy trying to build The Shops at Santa Anita, a similar retail concept.

Um...this is the kind of stuff I live for.

Thanks for the inside scoop! I should have known you'd have it. :-) I'm a little frightened that people kept saying they wished they could live at a mall, but I've probably even said it myself in weak moments. All the things that make such spaces scary (the conformity, the manufactured experience, the symmetrical piles of shiny things to buy) are also what make them comforting.

I have been through the whole content of this blog which is very informative and knowledgeable stuff, I would like to visit again.