the real reason gay marriage should be legalized 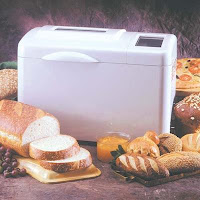 Given the name of this blog, I’d be remiss not to mention my new love: the Breadman Ultimate Bread Machine recently re-gifted to us by AK’s sister Lori. I’ve wanted a bread machine since my friend Amy got one in high school and began cranking out loaf after loaf of mouthwatering fresh bread.

(Amy was always an experimental cook. I swear that I once ate pizza with applesauce in lieu of marinara at her house. But usually the results were good.)

Never having assembled a wedding registry, I never had occasion to ask myself, Beyond matching table settings for 12, a Dutch oven, a popcorn popper, a gravy boat, pilsner glasses and sushi knives, what space-taking thingamabob do I need for my kitchen?

If I had, though, the answer would have been a resounding, “Bread machine!”

And now we have one! On long-term loan, at least, until Lori has a bigger kitchen.

So far I’ve made two loaves, mostly to prove to myself that I would and could actually use it. (AK may have displayed mild skepticism.) First up was whole wheat, because AK once read The South Beach Diet and concluded that white bread is poison, though she seems to have no qualms about cornbread or cinnamon rolls. Next I made something called “seed bread” because it sounded kind of healthy without being whole wheat.

Because I am a mixes-only kind of baker, I did what I almost never do: read the entire manual before beginning. It was full of severe, cautionary language about measuring EXACTLY and not making ANY substitutions not on their list of ACCEPTABLE substitutions.

But it’s kind of like how, when you’re in middle school, your teachers constantly warn you about the many kinds of bad, immature behavior you won’t be able to get away with once you’re in high school. Then you get to high school and it’s pretty much just like middle school, except now the teachers warn you about what will be unacceptable in college.

Actually, I’m not sure this is a good analogy except to say that the bread machine handbook makes bread-making sound much harder than it is. Isn’t the whole point that you dump ingredients in a loaf-shaped pan, press a button and come home to amazing fresh bread?

It turns out that’s exactly what happens. And the results are delicious. And your whole house smells like a perfect childhood.

I love our bread maker because the result is all slow-foody and sustainable and trans fat-free and stuff, but with none of the actual work. Which has always been what’s kept me from joining the slow food movement.

We haven’t tried the seed bread yet. I’m saving it for the sandwiches I’ll be making for our trip to Catalina tomorrow (how excited am I about that?). I’m fairly confident that it will be tasty, though, because 1) it looks tasty and 2) I didn’t make it. Breadman did.

You can get mixes for the breadmaker too. I used to make a rosemary Parmesan loaf that was amazing.

That would be the ultimate achievement in the bakerly laziness I aspire to. Rosemary Parmesan sounds even better than seed bread.

A bread machine sounds right about my speed.

"Isn’t the whole point that you dump ingredients in a loaf-shaped pan, press a button and come home to amazing fresh bread?

It turns out that’s exactly what happens. And the results are delicious. And your whole house smells like a perfect childhood."

I'm reassured by your experience & I love that last line.

LOL! Have a sweet weekend!

C: If I can do it, you can. Maybe even a mildly retarded monkey can.

The girl legal practitioner, Kenneth P. Thompson, said this wholesale nfl jerseys from china activity was “a hatchet occupation upon Microsoft. Diallo’s believability. ”“The prosecutors include quite simply taken the particular security justifications, ” they mentioned. “They may actually bend about back provide that will justification its decision to own off from this specific circumstance. ”Mr. Strauss-Kahn’s legal professionals, Bill W. Taylor III as well as Benjamin Brafman, claimed in a record they had taken care of of which their own purchaser appeared to be loyal. “We additionally managed that will there was a lot of causes to believe that Mr. Strauss-Kahn’s accuser were credible, ” the report claimed. “Mr. Strauss-Kahn and also his friends and family are usually pleased the centre attorney’s workplace procured some of our worries really in addition to concluded on its own this circumstance can not baltimore ravens jerseys advance additional.