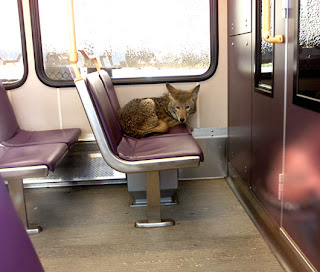 I’m trying to practice for my reading Tuesday night at Elliott Bay Book Co. in Seattle (see below), but for a while the helicopters were making it a little loud. Now things are quiet, but there are five cop cars parked on our block, and our upstairs neighbor reported that some of the cops had taken off on foot. Is that a good thing or a bad thing? Hard to know.

There were some noises earlier that, in retrospect, were not firecrackers. “I guess it’s never firecrackers, is it?” AK sighed.

Friday night brought a different batch of noises: yipping and yowling from the weedy hill at the top of the street. AK got out of her car and saw a coyote on the sidewalk. The common thread between Friday and tonight is that both times we rounded up the cats VERY QUICKLY.

Sometimes it’s hard to tell if you live in the middle of an urban turf war or a rural one. Avenues vs. um, another HP gang, or coyotes vs. cats. You want to root for everyone. We all need to eat, right? But ultimately I root for Team Gato, and I stay close to my den. Any animal would.

***
If you’re in Seattle, where it’s probably much safer, on Tuesday night, I hope you’ll come hear me read from a book that is coyote-free but does feature a mountain lion:

Good luck with the reading!

Me too! I'm at a coffee shop drinking amazing Seattle espresso right now, equally amazed that I'm able to get online with my circa 1895 wireless card. I hear vast amounts of coffee calm the nerves.

Without due cause, I worry about oppossum and feral cat stand-offs in our neighborhood . . . and hawks that swoop down to snatch up small dogs from the backyard.

Wish I could be in your Seattle audience!

I don't think possums are known for being confrontational animals, so you're probably okay on that front. I'm with you on the hawks, though. Those guys are fierce.