So much can happen in New York in 24 hours when none of them are spent working. Yesterday started with a matinee of West Side Story (a belated birthday gift from my dad). The musical is so of its moment (the moment in New York when people of color were moving in but white flight hadn’t yet occurred en masse), but so timeless too. I was struck by what a great song “Officer Krupke” is—in a musical about young people whose lives are fucked up by forces beyond their control, this song says, “Yeah, we know that’s true, but don’t take away our autonomy.” 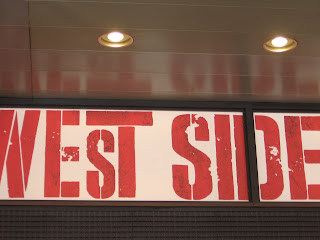 Another cool thing about live theater is that unlike film, where the camera dictates POV, here the actors do. So the main character for me was Anita (played by Karen Olivo), who was just amazingly fierce, big-hearted, big-lunged, vulnerable and devastated. When Maria sang a very good “I Have a Love,” all I could think about was Anita losing Bernardo.

This production ups its authenticity (as a show in which gangsters call each other “buddy boy” probably needs to) by having a couple of songs and lots of snippets of dialogue in Spanish. It was at least as easy for me to understand as the fifties jive talk. 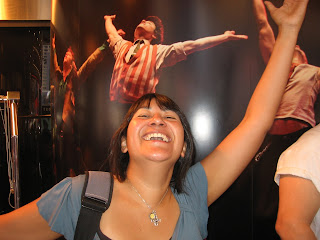 We made Tasty Bite Indian food in the apartment before hitting a West Village girl bar called the Cubby Hole. It was as crowded as its sounds, but friendly. And AK is good at chatting up strangers. I just smile and drink.

Sort of. Coney Island is a beach and boardwalk with carnival games and a sideshow. It used to have three amusement parks the last of which (Steeplechase) closed in 1965, the strangest of which (Dreamland) was in part modeled on then-new Freudian psychology. There was even a local society devoted to making film versions of their dreams with subtitles like “Dream of an Imperfect Jewish Mother.”

We watched some of them at the Coney Island Museum. They were so campy and brilliant and surreal that I was surprised I hadn’t seen them at CalArts or playing in the background of some DJ night at the York. 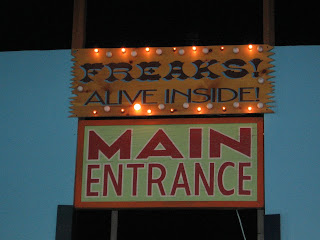 The museum and the ten-in-one sideshow (where we saw swords swallowed, fire eaten and lobster claws flared) are run by a nonprofit. But the rest of Coney Island is refreshingly shabby—rickety-looking carnival rides, junky empty lots, fortune-telling mannequins. The anti-Disneyland and in many ways the anti-Manhattan, with many more non-white people and some welcome elbow room. If I can capture any of that in my circus novel, I’ll be so happy. 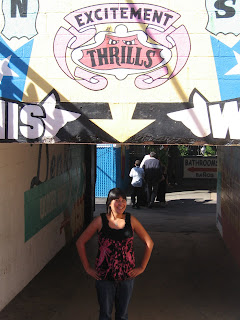 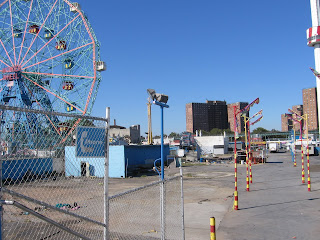 We were going to try to catch the ferry to Governor’s Island for a big Dutch festival they’re having, but we missed it and were kind of relieved to just bum around a Brooklyn flea market and eat pizza.

"...girl bar called the Cubby Hole. It was as crowded as its sounds, but friendly. And AK is good at chatting up strangers. I just smile and drink."

It's good to be part of a complementary pair. :)