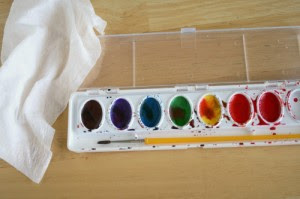 “Crazy artist” is one of my least favorite cinematic stereotypes. “Crazy genius homeless person” is right up there too. I think most artists aren’t crazy, just creative and hardworking, and the ones that are make art in spite of the crazy, not because of it. I know a manic episode can inspire a creative binge, but I don’t think it’s as simple as go off meds, paint Mona Lisa. Similarly, I don’t think most homeless people are fallen violin virtuosos just one shower away from Disney Hall. I imagine mental illness is a long, lonely slog that most often takes you away from yourself, not to some higher plain.

So imagine my surprise when I noticed one of Westwood’s resident homeless guys sketching and painting in Starbucks today: small fashion portraits of women in old-fashioned bloomers and a slightly Toulouse Lautrec-ish three-quarters profile. I don’t know if they were the visual-art equivalent of that soloist guy. But they were good. And he was filling them in with watercolors from a kids’ paintbox—you know, the ones with the eight little just-add-water circles. Imagine what he could have done with some serious tools.

He was talking to himself the whole time. At one point I caught, “Everyone trying to get by on $75,000.” Although he didn’t seem to notice anyone outside his head, the guys at the next table were lamenting the thousands they’d lost trying to flip houses, so maybe it was some sort of crazy-genius commentary.

I’ve seen this guy around. Pushing a shopping cart, washing windows at the other Starbucks down the street. He has a crown of dreadlocks and eyebrows arched in perpetual happy surprise. Unlike most schizophrenics you see on the street, he does not seem to be pissed off at the voices in his head. A lot of times they seem to be saying something hilarious. I’ve often thought that if I were going to lose it, I’d want to lose it like this guy. And of course any life that involves sitting all day in a coffee shop working on your art seems pretty appealing to me. Maybe I should worry that I’m halfway there. But maybe I shouldn’t.

I don't think you need to worry though the guy you describe does sound like the way to go.

As for mental illness, I think the big catch is that the phrase covers so many varied disorders that it's hard to generalize. Some may be "a long, lonely slog that most often takes you away from yourself, not to some higher plain," but I don't think that's always true. Well, whether there's higher plain action or not may be. Heck, maybe it is true if I consider it rationally. I just don't feel particularly lonely despite being alone, even though that's probably caused by my social anxieties which in turn may be a mental illness or just shyness.

Even when I was really depressed though, I did feel like myself. I was, in fact, concerned that by taking medication I would be less myself.

Are OCD and germophobia, e.g., illnesses or quirks that make a person who they are? Is it just a matter of degree? No simple answers, I think.

As a manic depressive, I can tell you that I feel more creative when I am manic, but I don't think I am, really. It's a lot liked being locked in a room with six different movies running constantly on the walls, with stereo sound for all of them going all at once.
Of course, I don't think I'm that creative to begin with, so there is that.

C: Yeah, the spectrum is huge, with blurry borders, so it's probably not fair to lump all mental illnesses together. I think I just feel the need to push back against how the media romanticizes them--maybe to the point of not realizing how illness can bring a kind of self-ness or enlightenment.

TL: Well, I think you're creative. But I'm not sure my sanity is to be entirely trusted.

My mom is an artist and not too crazy, unless you count co-dependent (which I do). My niece, Jenny, said about her grandmother, "Nana is a little crazy, but in a good way."

I think we should all aspire to be a little crazy in a good way!