confessions of a halloweenie

I wasn’t feeling very Halloweeny this year. I told AK that if she wanted to go out, the costume burden was on her. She did good: She went as Snoopy as WWI flying ace and I went as Charlie Brown as a ghost with eyeholes gone wrong. Easiest costume ever—just cut a bunch of holes in a sheet. 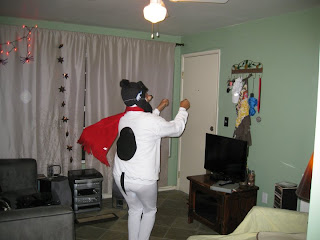 But at JP’s party I quickly discovered that I really dislike having stuff over my face. I felt a little too much like a ghost. I related to the I Don’t Care Bear we met, who had a big yellow head and angry tattoos. But I felt bad because AK was so creative, when costuming is usually not her thing. As in previous years, JP’s people brought it: Meg Whitman, Lady Gaga in her meat dress, some sort of bondage trio in really expensive-looking gear.

I sat next to the TV, which was playing, conveniently if I’d still had my sheet on, It’s The Great Pumpkin, Charlie Brown. I had my legs folded next to me and all of a sudden the flickering light hit my mermaid tattoo, which had gotten a couple of bug bites recently. Or so I thought. But in that peculiar light, I could see for the first time that the bumps were exactly where the lines of the mermaid’s hair and face were.

“Is it possible to be allergic to your own tattoo?” I asked AK and Christine and Jody.

I worry about turning into one of those people who’s always updating people about their weird ailments, but Jody and Christine were the right people to ask. They had all this information about hives and skin sensitivity and how you should always have some Benadryl on hand in case a friend with a peanut allergy comes over and you accidentally feed her PB&J.

I’ve been too lazy to call my tattoo artist or a dermatologist, so I’ll poll you, dear blog readers, about my weird ailment: Is it possible to be allergic to your own tattoo? One you’ve had for a year without major incident?

So there’s that, and then there is also a marathon reading to benefit Beyond Baroque (great literary center in a deliciously musty old firehouse in Venice) on Saturday. If you’re not weirded out by the sight of a slightly puffy tattoo, come on by. I’ll be reading for five minutes around 3:30. A hundred awesome writers will come before and after.

What: marathon reading to benefit Beyond Baroque
When: Saturday, Nov. 6, 10 a.m.-midnight (I’ll go on around 3:30)
Where: Beyond Baroque, 681 Venice Blvd., L.A., CA 90291
How much: donation requested, no one turned away for lack of funds (how many benefits can you say that about?)

Yikes. What do I do? I would hate to remove my mermaid or even just her hair. Although it might make her more punk rock.

i've gotten bumps on my tattoos before and they eventually went away. i think it's normal, but that's just me.

if you're really worried about it, go talk to a tattoo artist and doctor. i would talk to the tattoo artist first because they will more than likely be more familiar with those kind of bumps but it you aren't satisfied then see your doctor.

Glad to hear they went away. I think ignoring it will be my first line of defense. In general, I don't think that's the best approach to take toward medical stuff, but it will have to do at least until this class I'm teaching ends.