a story from the heart of los angeles

Driving into work this morning, I was dismayed to see that Pitfire Pizza had been replaced by Al-Abba’s Chicken. Restaurants come and go in Westwood all the time, but Pitfire was one of the good ones—hello, artisanal butternut squash pizza. The weird thing was that Pitfire’s neighbor, a preschool, had also closed overnight, a Goldblatt’s Delicatessen sprouting in its place.

Well, I thought, it would be nice to have a deli nearby, and maybe it won’t have that disturbing smell that Junior’s always does.

The weirder thing was that, by lunchtime, two crowds of protestors had gathered in the parking lot between Al-Abba’s and Goldblatt’s. One side waved an Israeli flag, the other held up a poster of the Palestinian flag. But all their signs were chicken puns: No piece, no justice! Give ‘em an inch, they’ll take a thigh!

This was, I concluded, a very strange and not that funny promotional stunt by the two new restaurants. But then one of the many onlookers who’d clustered across the street pointed to Larry David. Turned out they were shooting an episode of Curb Your Enthusiasm, a very strange and not that funny show, in my opinion. Nothing against Palestine, but I’m glad I’ll still be able to get my bougie pizza fix. 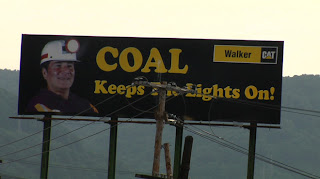 As for TV, I recommend tuning into Independent Lens, a KCET program (I think it’s PBS-wide? KCET and PBS just had some kind of schism that I’m a little vague on) that showcases indie documentaries. Tuesday at 10 p.m. (check your local listings) they’ll be showing Deep Down: a story from the heart of coal country, which just happens to be co-directed by my friend and Meehan’s gf Sally Rubin.

We caught a screening of it last night: The hour-long documentary follows a Kentucky activist named Beverly May who’s leading a campaign against mountaintop removal in her community. Rather than burrowing into mountains to get their goods (the stuff of which makes for good country songs and big fat lesbian ghost town novels), coal mining companies have taken to simply decapitating the part of the mountain that stands in the way. The result is not only a heartbreakingly stark landscape but lots of land erosion problems once the rains come.

But the movie isn’t an environmental soapbox. In the Q&A after the screening, Sally and co-director Jennifer Gilomen expressed that their first desire was to paint a picture of Appalachia that runs counter to stereotypes about missing teeth and dueling families (though one of their subjects did claim to be descended from the Hatfields of Hatfields and McCoys fame). Indeed, Beverly May is an unpretentious native who is also a highly educated environmentalist and healthcare worker. Her neighbor Terry, on whom the outcome of the film hinges, is a soft-spoken woodworker who’s having trouble making ends meet—and wouldn’t mind the $75,000 check that Miller Bros. Coal has promised him in exchange for the right to hack away at the mountain on his land (and to dump the rubble on it as well).

Only in LA. I, too, am not that into Larry David's show and that scene leaves a weird taste in my mouth. The movie plug sounds much better.

Hmm, I wonder if the Denver PBS station airs Independent Lens...I hope so!

Thanks for the shout out, Cheryl. And yes indeed, the film's being screened nationally on PBS, next week. In most markets, it's 10pm on Tuesday. Check out: http://www.pbs.org/independentlens/broadcast.html for exact times where you live, and deepdownfilm.org for more about the film.

Thanks for the official links!