what i read in october 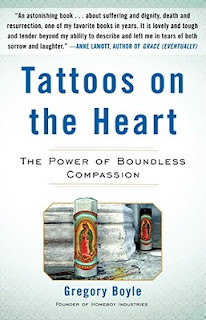 In October I read a lot of student work, my reviews of which are a matter of teacher-student confidentiality (and involve a lot of boring advice like, “Ask yourself what your protagonist wants, then give her some choices to make…”). So most of the books below were “read” via CD in my car. I miss you, recreational reading of actual paper books!

The Curious Case of Benjamin Button and Other Jazz Age Stories by F. Scott Fitzgerald: The stories in this collection are more fantastical than the novels of Fitzgerald's I've read, and I missed his subtle, glimmering descriptions of the upper classes. The title story is ripe with all kinds of opportunity for comparing nature to experience in determining a person's true age, but it doesn't do much with the idea. The last story, "O Russet Witch!" is probably the most Fitzgeraldian and my favorite. In between, there's some crazy stuff about mountain-sized diamonds, kidnapped pilots and a murky chase through some place in England.

Tattoos on the Heart by Greg Boyle: This collection of parables from Father Greg Boyle's work with gang members is an effective manifesto for unconditional love. Sometimes I wanted more about how he's gotten so many kids off the streets and into jobs--love will only go so far without good management. But as he points out in his chapter on "success," if you demand results, you'll only spend time with those who deliver them, thereby abandoning the most needy. So is love the only answer? No, but if you don't start there, you won't get anywhere. The book is fully of funny and fascinating stories, if high on the schmaltz factor. I was in the right frame of mind to receive its message; Father G would probably see me crying into my cereal bowl as the Lord at work. And why not?

Cod by Mark Kurlansky: A good history of the hundreds of years of fishing that added up to overfishing, plus some tasty-sounding cod recipes. Maybe because the book was written in 1997 and overfishing has been so widely reported on since, it didn't feel that revelatory. I also think there's a good chance I just wasn't in the right head space for this book. It was short on personalities, long on fish. So the result just felt long, period.

Speak by Laurie Halse Anderson: I sort of want to describe this as a solid young adult book, meaning that it's an engaging and sometimes moving portrayal of a teenager overcoming trauma and empowering herself to (literally) speak up; also that there's not a lot in it to surprise veteran readers. The bullet point-style narration does keep the prose fresh, but a really good young adult book should offer a more unique take on high school. Melinda, the narrator, makes ironic observations about her teachers' foibles and cafeteria politics, but the lack of originality--coupled with the strange timelessness of the setting--make the author seem removed from actual teenage life. Writers like Andrea Seigel and Cynthia Kadohata get into their young narrators' heads more convincingly.

I had to read Cod for a marine biology class I took. Loved the class. The book? Not so much.

Sometimes it did make me crave fish sticks.