keeping an eye on highland park 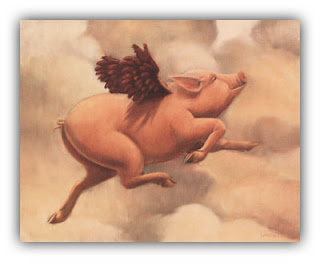 It’s the next best thing to having them review my book, which, okay, I won’t say would never happen, because it’s also possible that a pig could be born with some kind of genetic mutation of its scapula in which a sheath of skin would be stretched between its back and a point of bone, forming a batty wing that would enable at least a chicken-like level of levitation.

It’s almost cool enough to make me not really feel like rolling out my uncomfortable relationship with gentrification. But I will, just long enough to add that, from what I’ve read and observed about Highland Park, it seems to be gentrifying slowly, partly because a lot of poor people whose role is to get pushed out of “up and coming” neighborhoods weren’t so bad off in the first place: A lot of them own homes, a lot of them send their kids to schools that don’t totally suck, and some of those kids have grown up to be artists themselves. While the article says that HP “draws young trendsetters,” I think it grows them too.

Not that I’m an indigenous HP artist in any way. But I do appreciate that not everyone in Café de Leche is exactly like me. I also really appreciate that there’s this great little network of coffee houses. The girl who works at Café de Leche—whom I think might be an HP native, at least by the way she talked about buying her Converse for cheap in the Garment District—dates the guy who works at Cycleway in Hermon, where I have writing dates with Kathy and Bronwyn. I think he’s a NELA native too; he told a story about stopping at the graffiti-addled front gates of Debs Park for years before he realized there was a larger, unmarred park beyond. He talks about his girlfriend’s singing career, and she plays his noise band’s strange industrial music at Café de Leche.

“He makes really good coffee,” she told me admiringly.

They both know me now, but not in an annoying way where they ask my name or want to have long conversations. Sometimes the Cycleway guy talks about how the skinny trails of white steam in the sky are part of a government conspiracy. Apparently he’s been keeping watch for a long time.

So what does one do on a "writing date"? I'm intrigued...

Also love how much you know about your coffee shop folk while keeping a low profile yourself. Not too low, I hope. Gotta promote that book! ;)

One writes. It's just a way of holding yourself to it, like having a workout buddy.

There are a surprising number of people in coffee shops who want to know what I'm writing; sometimes they're cool and I try not to be too shy and angsty. Sometimes they're aspiring comedians who want to tell me un-funny ethnic jokes, and I tell them to fuck off. I wish those had been my exact words.

I can't concentrate to write in a coffee shop environment, ensuring my hermit/recluse status.