the movie i can't wait to not see 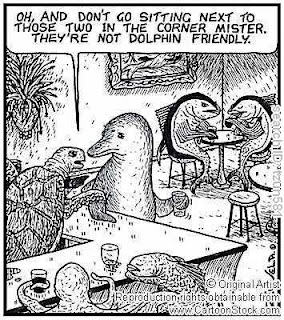 Last night on the way home I listened to Terry Gross interview the people behind The Cove, a movie that could easily kill me.

That’s probably a poor choice of hyperbole given that the movie is about actual killing, specifically of dolphins: They’re herded into a cove in a small Japanese village by fisherman banging metal rods underwater (which is basically the equivalent of firing a gun next to your ear if you have sonar). Once the dolphins are trapped, the pretty ones are recruited as swim-with-dolphins amusement-park whores, and the ugly ones are slaughtered and sold as meat. Which is poisonous, incidentally, because their bodies are so full of mercury. Leave it to humans to figure out how to kill an animal twice.

Should I go on?

“I think maybe I shouldn’t see that movie,” I said to AK at dinner (a reprise of Saturday’s mac and cheese, which turned out quite nicely, thank you). “Or maybe that’s exactly why I should see that movie.”

“You cannot see that movie,” AK said sternly. “I mean, you can if you want, but I won’t see it with you. I can’t watch you watch it.”

So I’m not going to see it. But if you’re made of tougher stuff than me, maybe you should. What does it say about me that I had no qualms about watching Born Into Brothels, but I draw the line at dolphins? (I never actually saw Born Into Brothels, though, because people who get upset by bad things happening to humans never wanted to see it with me.)

I get annoyed when people pause from their comfy liberal lives to wring their hands over some shocking bit of information, then proceed to do nothing about it, or something token-ish at best. Many things in the world suck. This is not news. My philosophy is: Be tough, or be an activist, or both. Your heart is only allowed to visibly and embarrassingly bleed if it leads to action.

Except I don’t always follow this rule. After hearing Fresh Air last night, I vowed to finally give up seafood, except when AK’s mom makes salmon especially for me when everyone else is having ribs, because how sweet is that? Or if AK makes her signature shrimp stir-fry because it seems that one should always encourage one’s girlfriend’s dinner-making habits.

Mostly giving up seafood seems pretty damn token-y. Any thoughts on what a real activist (but one who doesn’t want to get thrown in a Japanese prison*) would do? Write my congressperson? Write a Japanese congressperson? Pay for a ticket to The Cove so it makes money, but then sneak into Hump Day instead?


*Although I bet they’re a lot nicer than American prisons. There are probably water saving toilets and lots of ramen.

Labels: movies, save the world

I'm with AK. I can never handle this type of graphic truth. When I was kid, I was sure I was going to grow up to work with animals. But that was when I thought it was going to be totally cute and cuddly.
And it was also before I realized that math and science were not my best subjects.

Oh, AK could handle it. She just knows I couldn't and doesn't want to watch the fallout.

Yeah, I wanted to be a vet until I realized it's just science with fur.

I absolutely could not handle that movie. And yet blowing up people? So totally down with that.

But then, I am not really a very nice person, so that's ok.

"Your heart is only allowed to visibly and embarrassingly bleed if it leads to action."

Now that's a call to action. I think the missing piece with a lot of problems-in-the-world media is that they don't issue a next step at the end of the film.

"An Inconvenient Truth" was a great film, but didn't answer the most important question: Yeah, that's crappy, but what can I do?

--This is a re-post, there were typos in my last.

After posting this, I discovered that The Cove's website conveniently has a "take action" tab. Now I really have no excuse not to.