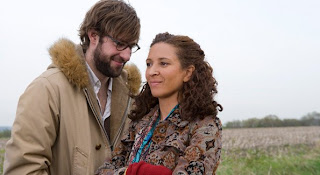 Okay, now that we’ve gotten that moment of meta out of the way, I will proceed to tell you how much I liked Away We Go. It’s not the most original or brilliant movie ever, but its ordinariness proves it’s not the quirk-fest the trailer implies either. It’s a simple movie about a couple in their thirties trying to figure out their lives. One is an artist who’s lost a parent (two, actually).

Sometimes I find books and movies about people in the same boat I’m in (or, say, a more pregnant, heterosexual, mountain-dwelling—but nevertheless similar—boat) to be incredibly stressful. I may have mentioned that I boycotted The Wonder Years throughout junior high. But other times, a dose of cinematic empathy is just what I need. Especially if it allows me to convince myself that my hair could look as cute as Maya Rudolph’s.

So many movies about couples are built on some sort of boring will-they-break-up, opposites-attract scenario. People spend a lot of time stomping out of rooms and chasing each other down in airports and train stations. Thankfully the only plane-/train-centric scene in Away We Go is when the airline staff doesn’t believe Verona (Rudolph) is only six months pregnant and refuses to let her fly. So they take a train.

But there’s never any doubt that, wherever Verona and Burt (John Krasinski) go, they’ll go together. They get on each other’s nerves periodically, but they’re always friends. This concept is sadly radical in the realm of romantic comedies.

As they look to various friends in various cities for models of how and where to construct their family, they encounter cautionary tales (one of which Maggie Gyllenhaal saves from being too cartoon-y) and discover that even the most Jolie-Pitt-esque families aren’t immune from heartbreak. They realize that the life they build will be uniquely, frighteningly their own and a product of their family histories. It’s a message I’m into lately. But my version involves Malaysia and cats.

A perfect review. I'm in my 60s and past most of the questions it covers (though I'm not convinced many of us ever have our lives figured out, at whatever age, and, if we did, life would be boring) but I found Away We Go refreshing for many of the same reasons you did. A couple in love who intelligently make their way past obstacles--ordinary, and yet engrossing to watch.

Malaysis and cats? Your keys are your keys. Carry on!

Have fun in Malaysia. I'm doing cats in Seattle, myself. Well, not DOING them. I have cats. They are in Seattle.
NOBODY IS DOING ANYBODY OVER HERE.
*sigh*

this movie appealed to me right away. just by viewing the previews, haven't seen it yet, i knew it was going to be my kind of movie. i also knew that that's the kind of movies i want to make!

i guess i'm a good judge of previews. hahaha!

You know, when I first saw the trailer I was happy to see my boy John and the wonderful Maya in it. But, it felt like something I've already seen. Hmmm. Maybe you've convinced me to rent it. I'll do so in 2 weeks. :D

P: It might be like something you've already seen, if what you already saw was REALLY GOOD. Two weeks? Do you have some kind of hook-up at Netflix?

I didn't want to see this, but a friend recommended it and now you. So I'll have to go check it out. Damn stupid trailers!

Yeah, I think someone in the trailer-making department decided to rely way too heavily on various bits of hipster shorthand. Marketing: grr.