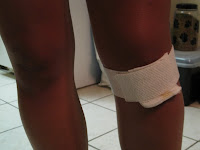 When my friend Erin was training for a marathon, her girlfriend (now wife, and this is probably why) would ride her bike alongside, toting water and a stopwatch. When Craig ran the L.A. marathon, his boyfriend Kenny camped out at several spots along the route with peanut butter and jelly sandwiches and a small army of cheering friends.

When AK ran the Palisades/Will Rogers 10K on Saturday, as part of her half-marathon training, I waited at the mile two marker and spaced out until I heard her yelling, “Cheryl! Cheryl!” I looked up just in time to distract her, then see her trip on a lumpy spot of asphalt.

I poured water on her bloody knee and tried to put on a smile that said, I’m so sorry I just distracted you, but I promise not to make this one of those many times where I mess up and then apologize profusely as a strategy to force you to make me feel better about messing up. Today is about you. Run, AK, run!

She ran off and I trudged toward the finish line. I looked very, very hard at every person who crossed from minute 54 on. But then the kids who’d toddled through the 1K started pouring in, and a bunch of pushy moms and grandmas decided it would be okay to stand right in the runners’ chutes, because those ropes are just a suggestion, I guess.

Or maybe AK got obscured by the family of four who was running in front of her much of the time. Adorable, right? The family that 10Ks together stays together, right? Actually, she said that the seven-year-old kept begging to walk, and his parents kept yelling at him to keep running. Look, kid, weak little whiners don’t grow up to have houses in the Palisades.

Anyway, despite the fact that there were like five Latinos in the whole race, I missed AK’s big finish. I found her twenty minutes later, looking very ready to go home.

There are two weeks till the half marathon. I think AK will do great, but her support team still has some training to do.

Cheryl, you'll do better next time. :)