this post is supposedly about baseball, but mostly it’s about clothes 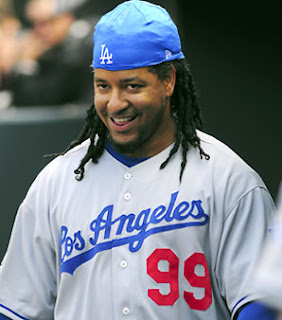 AK stalks Craigslist the way I stalk DSW.com, so last night we had field-level Dodger tickets for the price of nosebleeds (and I wore great shoes: silver-and-gray Converse with little splashes of orange that matched my nail polish).

I learned a few important things:

1) On the field level—which probably has a more official name—there are nice bathrooms, and they sell Wetzel’s Pretzels instead of generic brand soft pretzels that aren’t so soft anymore.

2) Sitting next to fans of the visiting team who have strong lungs is not all that fun. One of them made his own blue T-shirt that said “Mannyroids,” which, for people who know as much about baseball as I do, alludes to Manny Ramirez, who was suspended for taking performance-enhancing drugs but is now back.

Normally I don’t think of zillionaire athletes who cheat to get ahead as underdogs, but after a while I started to feel sorry for the guy. Not that sorry, but a little. Partly because there’s a whole culture and industry pressuring athletes to do drugs, and that same culture/industry seems a little hypocritical when it punishes the guys who succumb to it. Partly because public humiliation administered by idiots just seems tacky. I guess the Braves fan next to us gets points for actually going to Michael’s and purchasing iron-on letters and applying them with what I have to admit was excellent spacing. Then again, maybe he loses points.

3) Boys puff their chests up and look like pigeons when they’re about to fight.

5) You can get three points (“Runs,” said AK. “In baseball they’re called runs, not points.”) at once if there are guys on first and second and you hit a home run. If it’s the bottom of the ninth inning and your team was losing up until now, this is pretty cool.

I love the baseball like you love the shoes, and as a Boston Red Sox fan I can tell you to save your pity for someone who is less of a spoiled child than Manny Ramirez. That guy is a douchcanoe.

You should be happy to know that the field level is actually called by its official name, "The Field Level." It is the only level without a name that makes no sense.

The other levels have names such as "loge," "reserve," "club," and, "top deck." None of which make any sense to anyone.

Sounds like you'd make a great Barry Bonds fan, Cheryl. I used to feel the same sympathy for him, and then not really care why he hit the homerun -- just that I got to witness it.

TL: It's hard out there for a douchecanoe.

S: You and AK will have to fight over him. I nicknamed him Jon-and-Kate, because he looks a little like Jon of TLC fame. But cuter.

N: Ultimately I don't think I'll make much of any kind of baseball fan. Both my sympathy and my fandom are pretty lukewarm, although I do feel passionately about the various tiers of snack foods available at the stadium. What do they feed you at, um, Giants Stadium? Is that what it's called?

It's possible to score 4 runs if the bases are loaded when you hit a homerun. Just, fyi. :)

First game I remember seeing was for my 5th or 6th birthday. Drove over to see Yankees v. Red Sox. The guys behind us were kinda drunk and yelled so loud for the opposite team I liked at the time that I was too nervous to cheer.

I've never been really invested in baseball though I like having it on for background sometimes, and I like to see a game about once every ten years. I'm probably due. Yeah, last game I saw was Dodgers vs. Brewers during my '97-'00 LA stint.

Tracy, I hate the "that's Manny being Manny" saying, so I offered it as a kind of joke. It's ridiculous to excuse pro athletes' (or anybody else's) behavior with an illogical "oh, that's just how he is!". It's kind of bullshit.
That said, I think Manny's a fantastically fun player who was a quitter/washout his last few months with Boston--but, then, every player seems to do that with Boston. (Garciaparra? Clemens?) I think there's something about the intensity of playing in Boston that makes every player sick to death of it by the time they leave. I think Manny cares more about himself than his team often, but his cuckoo-for-cocoa puffs, laid-back vibe is perfect for LA. I like that guy. And I wouldn't be surprised at all if he ditched us for another team sometime soon.

Douchcanoe. Love it. I'm using it.

My favorite line: "..." with what I have to admid was excellent spacing."

When I was a Disney cheerleader for the Mighty Ducks and the Angels I was surprised to learn about the "economic disparity" between hockey fans and baseball fans.
And yes, it was all about our uniforms and the color coordinated shoes.

U: I do appreciate a good craft project.

PV: How did I not know you were a Disney cheerleader?! I'm so jealous. Did you have Kaepas with the little snap-in triangles in various colors? God, I loved those so much.