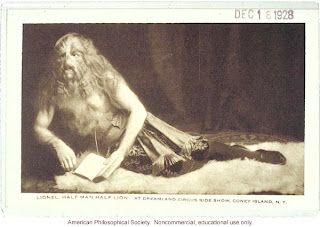 The new Phantom of the Opera sequel will be set in Coney Island, which tempts me to write a mini- dissertation on the journey from high art (opera) to low (carnival) via middle (big-budget musical theater). About how all three forms are suffering compared to new-media art (which can be high or low, from experimental films to someone farting on YouTube). But while musical theater plus circus sounds like a pairing made in Cheryl heaven, in this case it’s not.

Maybe I saw the original Phantom too late into the hype, but I thought Christine and Raoul were boring, and since I was at the height of my identity-politics-driven college years, I was pissed that the ugly guy had to meet a tragic end. I pretend to hate Andrew Lloyd Webber in favor of the more respectable Stephen Sondheim, but it truth there are plenty of ALW shows I like: Sunset Boulevard, Evita, Jesus Christ Superstar…and yes, even Cats.

(What? I like dancing and I like actual cats [because it’s not all a metaphor—it kind of is about cats, which is why everyone hates it, I guess].)

But Phantom is not on my good list. And I wonder whether Webber will make Coney Island all broke-down and sleazy, or just a backdrop for lavish set pieces. Because my memories of Phantom are vague, I can’t make a terribly educated guess.

I’ve been doing some reading and writing about circuses lately, and since my budget is less than one of the diamond-y doodads on the Phantom chandelier, I think it’s fair to cast myself as a hardscrabble writer in this instance. I’m interested in the intersection of things that are dark and things that are wholesome, and what is lost if you veer too far toward one or the other. I’m trying to write stuff that’s more intense and magical than stuff I’ve written before.

It’s hard work and I don’t want Andrew Lloyd Webber to beat me to it, dammit. But maybe I shouldn’t knock his freak credentials. Have you noticed how much he looks like David Guest these days?

Hmm, I did not care for Cats, but then I went to it so I wouldn't have to see Les Mis again. I saw all my Broadway shows during HS. A quick look at ALW's site and I think Starlight Express is the only other one of his I saw. That one was at a closer local theater, i.e. not NYC & during middle school, and I loved it. Rollerskates, yea! Gay much? ;)

"I’m interested in the intersection of things that are dark and things that are wholesome, and what is lost if you veer too far toward one or the other. I’m trying to write stuff that’s more intense and magical than stuff I’ve written before."

Very cool. You've read Running With Scissors by Augusten Burroughs, right? Not novelly like you write, but that sense of light meets dark with magical thinking.

I haven't read Running With Scissors--I think I was put off by the movie, which I thought was over-the-top and kind of in love with its own quirk. Did you see it?

As for roller skates: Whip It! We're so there.

I did see RWS, trying to remember if I read it before or after. The movie stars are prettier than the book characters but his life growing up was that crazy from what I've read.

Reading Simon Doonan's The Beautiful People (previously published as Nasty) which has similar humor but is lighter in overall tone. Doesn't seem quite as dark somehow though if you think about some of it, it could have been. All about the POV.

Have fun at Whip It! I really enjoyed it. Tempted to see it in the theater again.