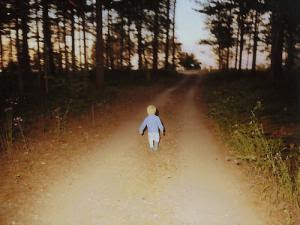 It's not uncommon for me to go to a friend's reading/opening/screening/play to show support for said friend and for the community in general. It's also not uncommon to come away thinking, Wow, my friend is even more talented than I realized. Rediscovering people you already know--or getting an intimate glimpse into the life and mind of an acquaintance--is one of the strange perks of knowing a lot of arty people.*

But it is uncommon for me to be as floored as I was last night, when AK and I saw her friend and colleague Evah Hart's exhibit, Growth Avenue, at the Deborah Martin Gallery downtown. Over the course of several years, Evah documented her family in Fort Wayne, Indiana, a time period that included the illness and eventual death of her youngest brother.

So yes, there's an intense personal story at the heart of her show, and it was jarring to walk into a room full of, well, intense and personal images that also had a party going on in the middle of it, a party that included Evah and her parents. But what makes the exhibit so memorable is Evah's skill as a photographer and the way she uses it to convey love without shying away from things that are bleak or hard.

The word that kept coming to mind was real, and maybe that sounds condescending when you're looking at pictures of a Midwestern family in a hip downtown art gallery. But by real, I mean strength-of-emotion, which she transmits through juxtaposition (photo of night-lit merry-go-round next to photo of plain-looking church against a flat landscape); color (stark blue winters, sepia summers, saturated domestic florals); and portraiture.

On one wall, there are rows of family portraits, taken in different seasons in different years, with a gap like a missing tooth where the youngest brother's photo would have been. But then, below the column of the younger sister's photos, a new growth: a tiny nephew dressed in a snowsuit, looking a little like a penguin while carrying the weight of the family's future on his small shoulders.

I had to remind myself that while of course the whole experience was devastating and life-changing for Evah because she'd lived it, she was probably not, in this moment, feeling as emotional as the rest of us were. She'd already spent hours, days, years with these photos. And no matter how personal the roots of an artistic work are, the process is also intellectual and mechanical. But the mark of a good artist--the fruit of that intellectual and mechanical labor--is that the work takes its viewer right to the emotional root, making everything else invisible.

And Growth Avenue does this, in a rich and beautiful and real way. So if you can make it downtown before Nov. 7, do.


*Actually, I'm sure this is true of anyone's work. I've gotten insights into my family members by watching my sister teach and helping my dad write up reports for his job as an engineer. The only thing that makes artists different is that they're always inviting people to witness their work. Civilians are more modest.