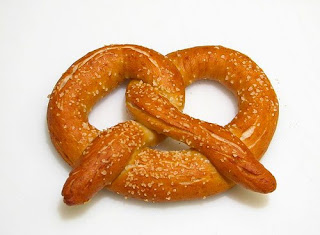 1. in which the dmv seems appealing

October is Breast Cancer Awareness Month. Usually the only awareness month on my radar is Poetry, in April, because it means I have to work a lot. Oh, and National Pretzel Month (February).

But I’ve been thinking about breast cancer this month because for a second I thought maybe I had it. Spoiler alert: I didn’t. I had some benign fibrous thingies and a case of hypochondria. Although, if there is something there—even if it’s just a poseur of a tumor—you’re not making shit up, right? So is it technically hypochondria?

Anyway, I got it checked out because I could, because I have health insurance, which everyone should have, including a public option (please write to your representative). Apparently I have very nice health insurance, because I landed at the Huntington Hospital Breast Center, which looks like a fucking spa inside. We’re talking white bathrobes, fountains, Cirque du Soleil (!) on a loop in the waiting room, good magazines like InStyle, not crappy ones like Parenting and Forbes.

When I told the receptionist that the niceness of the place creeped me out, she gave me a weird look. I tried to explain that if it were more like the DMV, I’d be more convinced I had nothing to worry about. Because you’d only treat a healthy person like crap, right?

I didn’t need to worry, as it turned out, but I might someday. I’ve got the whole family history thing. I periodically have conversations with Nicole, whose mom died of breast cancer earlier this year, about how we’d deal:

Nicole: If I had to get reconstructed boobs, I’d go up a size.

Nicole: The bummer is that they tattoo nipples on you. I like my nipples.

Me: Yeah, I think I’d rather go the postmodern route and just get a big old mural across my chest.

Me: If you’re going to be a cyborg, just embrace it and go full cyborg, right?

2. everything i need to know about health care i learned from the west wing, but not in the way you think

This is the lighter side of the sporadic preoccupation with death I seem to have developed in my early thirties. As I’ve listened to news reports about health care and how we spend too much on stupid tests, I’ve felt guilty and grateful that I had the option of this particular ultrasound.

But I guess it’s like that episode of The West Wing where President Bartlet’s daughter was kidnapped. He knew that it was natural, as a father, to want to devote all the country’s resources to finding his kid. He also knew, as a president, that that was not a good use of said resources. So he took the decision-making power away from himself and temporarily turned things over to the VP.

It was a really riveting episode. Anyway. I’m saying that I shouldn’t be the person who decides what tests I get, and I will abdicate to any non-corrupt entity (the Breast Panel?) that can make decisions based on something other than profit.

In the meantime, I will keep trying to take care of myself, which means cutting back on caffeine and soy, which apparently cause lumpiness and which are my favorite foods.

And I will mourn for all the people who’ve taken plenty good care of themselves and have died of cancer in all its many and ugly forms anyway. For the woman at the spa center who had clearly not gotten good news and was just trying to get out of there without falling apart.

Sometimes I think cancer research is not the world’s biggest priority—if the world is full of kids dying at five of malnutrition, should we really put all our money and brains behind helping sixty-year-olds live to seventy?

Other times, I think hell yes. Even if it feels a little indulgent. Even if it’s not so different from wanting a really good soft pretzel.

Labels: carbs, save the world, TV

Technically, President Bartlett turned over the reigns to the Speaker of the House because his VP had recently resigned, which you no doubt knew but were keeping it simple. Why I fixate on this in this post.... well....

I would really dig "fucking spa inside" style doctors' offices, but I've never encountered one & don't think any exist where I live.

Glad to hear it was a false alarm for you. Not hypochondria at all getting something actual checked that turns out to be benign.

Oh yes, there was that whole VP scandal storyline--I'd forgotten. This is why no one wants me on their pub quiz team. :-)

While not directly related to your post, this Boston Globe article has an interesting take on the pink ribbon movement:
http://www.boston.com/bostonglobe/magazine/articles/2009/10/04/sick_of_pink/

This is a fascinating article. I've often thought about the weirdness of a disease launching a hugely successful marketing campaign, and (as someone who works for a nonprofit) I'm skeptical of the concept of "shopping for a cure" when a direct donation would be so much better.

When I was worried about the possibility of breast cancer, one of the things I said to my girlfriend was, "Ugh, if I got sick, people would start buying me things with pink ribbons on them."

This is a great post, and I had a lot to say about it. But I heard in my own head what I was going to say and I sounded preachy. It boiled down to this:

I'm super glad you're not sick. And if, god forbid, you did get sick I would NOT buy you anything with a pink ribbon on it. How tacky.