It seemed like maybe things weren’t off to a good start when my tattoo artist:
Just last week, I was telling AK that Barney’s Beanery is probably my least favorite bar. But after chatting with Justin for a while (and accidentally kicking him several times—apparently getting one’s ankle tattooed is a little bit like having a doctor hammer your knee with that rubber mallet thingy), he seemed to forgive me for not explaining my tattoo better, and I decided that the guy whom Justin’s friend stabbed was totally asking for it.

And I love my new mermaid (thank you, Mom and Justin Lewis of Artifact Tattoo in Canyon Country!). Even though my foot looks kind of weird and misshapen in these pictures. I am going to pretend it’s just the angle. 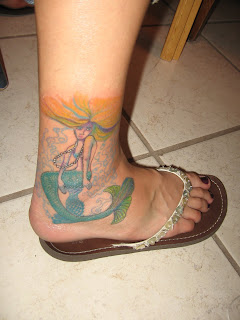 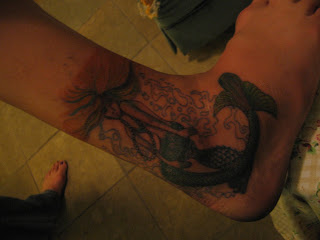 Saturday night, my mermaid and AK and I went to a sort of unofficial high school reunion organized by some class-of-’94 folks. I mildly regretted not going to the official class-of-’95 reunion a few years ago and figured that I wouldn’t have many more chances to pay $25 instead of $80 to see my fellow mustangs.

What I did not count on was that a high school reunion would be a lot like…high school. Afterward, AK asked, not unkindly, “What exactly were you expecting?” I guess I was expecting a Romy and Michele scenario—either their fantasy reunion, where the once-popular girls groveled at their fabulous feet, or their real reunion, in which some of the popular kids turned out pathetic, and the one who turned out nice wanted to be their friend.

But at the Manhattan Beach Neptunian Club, where nineties songs pounded too loudly for casual conversation, beer flowed in red plastic cups and the lighting was as bright as a middle school dance, all the people who never talked to me in high school continued to not talk to me, and I continued not to talk to them.

It was really nice to see Bonnie, Kristy, Jynette and Laura, but I see most of them occasionally anyway, usually for less than $25. As with CalArtsy functions, where I feel all shy and not sufficiently avant garde, I reverted to the person I was when I was at the school in question. In this case, all shy and too avant garde.

Oh well. It was something I had to get out of my system. Now I’ll happily return to lurking on Facebook, which is much more my style of finding out what people are up to.

That's a serious tattoo, Cheryl! I applaud your commitment to being avant garde.

I'm not sure how avant garde tattoos are these days, but I like to think that I at least have a commitment to mermaid art.

Ankle/foot tats are painful. You are one brave lady!

I love your mermaid. I go bananas for nautical tattoos. I keep telling my wife I'm getting an anchor on my forearm, but she says she'll kill me.

S: Dammit, I knew I should have gotten a tramp stamp instead.

MD: At least you'd die with a bad-ass anchor on your forearm.

That tattoo looks goooorgeous. I bet it will look great in heals!

In other words, I didn't miss out on our pseudo-reunion?

Beautiful ink. And the tail turned out nicely!
"I invented Post-its."