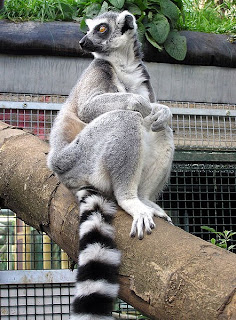 I was going to post about how I found RZA’s theory (outlined in his Onion AV Club interview) about the lack of a gay gene really lame—how even though I don’t think the point is whether homosexuality is genetically caused or not, his theories are one part Freudian bullshit and one part biblical bullshit—but then I realized that, to be fair, I should read the whole interview.

So instead I direct you to this far finer piece from The Onion’s news desk: Report: 65% Of All Wildlife Now Used As Homosexual Subculture Signifier

Zoo Zurich has (or had a year or so ago) an exhibit on homosexuality in the animal kingdom.

As for a gay gene, I think it's probably not so simple as 1 gene to be flipped on or off. It may be a combination of genetic factors that align to make people gay, bi, hetero, trans.

I get why it's important to some people to deem gayness genetic; it does make a compelling arguing strategy for equal rights that takes religion out of it. However, I think it kind of misses the mark. The whys of a person's sexual orientation/gender identity shouldn't matter.

If only people didn't need so much convincing...

I agree with Claire that a combination of factors may lead to gayness (although research really seems to point toward a genetic disposition that either is or isn't acted upon).

But let's not pretend Señor RZA is all reasonable about his gay cousin: "I don’t want to say he was born like that, because he didn’t show these traits as a baby, but now he’s growing up and growing into it." Uh, what? You know straight boy babies--all their whoring around with the ladies.

That interview reads like he was kidding, or playing a Wu Tang character. Was anyone named Pootie involved?

CCY: I also like his theory that his cousin lusts after men because his mom was longing for a man while she was pregnant. Very 19th century-chic. Very "the Elephant Man's mother was frightened by an elephant." Maybe I like '70s clothes so much because my mom wore them while she was pregnant, in the '70s.

The only good thing about the RZA interview is his belief that Bruce Lee was a minor prophet. The rest is...wateva.

N: Thanks--now I know which other excerpt to read.

Who is RZA & why do we care what he thinks about a gay gene?

I don't think it will ever catch on, but if you're going to label my queer identity after an animal, I'd like to be referred to as a 'dolphin,' please.

B: Member of the Wu Tang Clan, who just wrote a book about his philosophy of life. Are you telling me you're not a hip hop fan?!

PV: You are sleek and playful.