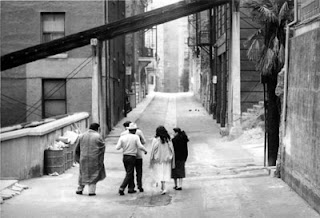 Five years ago Saturday, AK and I had our first date at Akbar. I’d messaged her on MySpace—remember MySpace?—because she’d listed “the dirty parts of L.A.” as one of her interests. After gritting my teeth for years as my ex pondered moving to Michigan or Singapore, it was a huge relief to discover how much AK and I both loved our adopted hometown, which was forty and twenty miles away, respectively, from our actual hometowns.

So it made sense to celebrate our fifth anniversary by seeing Los Angeles Plays Itself, a documentary about L.A.’s many movie roles that is equally famous for the fact that it will never be released on DVD because buying the rights to all those movie clips is unfathomably expensive. We caught one of the film’s semiannual screenings at the Aero Theatre, and I proceeded to geek out for the next three hours.

It’s worth the time commitment to see clips from little known movies like The Exiles, famous ones like Blade Runner and classics I’ve missed, like Kiss Me Deadly. A voice I’d describe as laidback noir speaks of the words of filmmaker Thom Andersen, who does some pomo philosophizing on the meaning of representation and shares theories that can only come from years of meticulous movie watching (did you know that conventional movie wisdom hates modern architecture? Gorgeous Wright and Neutra homes are almost always cast as villains’ lairs). But above all he’s an L.A. nerd who can’t wait to tell you that Johnnie’s diner on Wilshire is open all night in the movies but closed at five in real life—that is, until it closed entirely. Now it opens only for camera crews. He likes to point out palm trees in films that allegedly take place in Chicago or made-up locales like “Center City.”

AK noted that Anderson favors realism. The final third of the film forgoes the giddiness of the first two thirds to focus on gritty depictions of life in L.A.’s working class African American neighborhoods or on tumbledown Bunker Hill before, during and after its depressing “revitalization.”

Seeing L.A. as it was and as it never was is breathtaking. Nevertheless, I probably slept through at least forty minutes of the film. It was long, and the theater, like all theaters, was freezing. But it’s nice to know that, even sans DVD release, we’ll be able to see it again. We’ll be here.

Sounds like a film I'd enjoy. I saw quite a few parts of LA through shooting on location, apt. hunting, where friends lived, and some perhaps ill-advised wanderings in search of a deal. I think it's more varied than people who haven't been there realize.

And the reason that people don't know about L.A.'s diversity is, of course, the movies. Hopefully they'll screen L.A. Plays Itself in New York sometime!

Yes, but at the Aero?? I'd have to go west of Sepulveda.

Having a partner who works for the local city planning department is always kind of a buzz-kill when it comes to watching TV or movies because he always feels the need to point out the scenes allegedly taking place in NY or Chicago are actually specific streets/neighborhoods of L.A.
Congrats on the 5 Year First-Date-a-versay!

PV: There's this one block of Mariposa in Koreatown that I swear must have played New York multiple times. It's very brownstone-y, with a lot of street life. I love it.