what i read in february 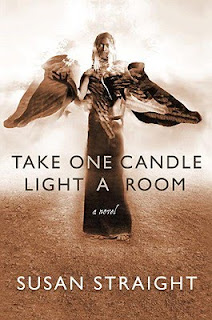 Half the reason I’m posting this is to push that photo a little further down on the page.

Take One Candle Light a Room by Susan Straight: I always liked the IDEA of Star Wars--the creation of a world and a mythology that unfolded over many generations. But I wasn't that into the intergalactic stuff, so I love that Susan Straight has created the literary fiction equivalent with her many stories from Rio Seco. Specifically, Take One Candle is a two-hundred-years-later sequel to her excellent A Million Nightingales.

Narrator Fantine Antoine is a slight departure from Straight's usual protagonists in that she has transcended her working class background and become a successful travel writer; Straight problematizes the experience of passing (literally and figuratively) and of abandoning one's roots without romanticizing the world of poverty and violence. This is not one of those books where the assimilated protagonist solves all her problems by learning stuff about her grandmother, despite being adjacent to that genre. The novel follows Fantine's sometimes confusing journey (the book could have benefited from a family tree a la One Hundred Years of Solitude) to save her wayward godson, a pursuit which takes her through her extended family's migration from Louisiana to Southern California. It lands back in Louisiana on the eve of Hurricane Katrina and glitters with Straight's vivid, meaty prose the whole way.

Bad Dirt: Wyoming Stories 2 by Annie Proulx: Proulx's Wyoming is a hardscrabble territory for everyone who touches the dirt there: the old-time ranchers, the young guys scrounging for work in the natural resources industries, the environmentalists and even the retirees who buy imported olives. I listened to this book on CD, which in retrospect is not the best form for reading short stories, so I spent a lot of time just trying to orient myself to a new batch of characters every few tracks. But I enjoyed the many intersections of the Old and New West, and Proulx's weird (though not awkward) jaunts into magical realism, such as her story about a magic teapot that conjures up meatloaf for the unambitious wishful.

More Than It Hurts You by Darin Strauss: Darin Strauss' prose has the same clairvoyant quality I love in Michael Cunningham and Richard Yates (though I don't remember it as much from Chang and Eng, which I read years ago). Here he turns his powers on various characters pulled into the investigation of a possible case of Munchausen by proxy (you know, that syndrome where mothers hurt their babies for medical attention? In the early nineties it was one of those diseases that 20/20-type shows sensationalized). Seeing the baby's dad, Josh, finally outgrow his unconsciously cultivated innocence was especially moving, maybe because I'm in my thirties and newly aware of how innocence is a nonrenewable fuel for positivity. But I also appreciated Darlene, the nerdy, dogged African-American doctor on the case, who harbors plenty of wariness etched by years in white-dominated worlds but still isn't quite prepared for the clumsy, messy, absurd scandal that unfolds.

In this novel subjectivity is a dangerous weapon that causes social institutions to fail, but it's also our only hope for a sort of post-institutional human truth. The book is a page-turner and a thought-provoker. Strauss arguably gets a little too giddy with his descriptions at times, but I took it as a literary jam session I was happy to attend and sad to leave.