AK left her ATM card in the machine at Banamex bank, which led to me say, “Can you please try to be more vigilant while we’re traveling in another country?” And she said, “Could you not tell me to be more vigilant because I’m trying hard and I’ve been pretty good and these things happen sometimes when you travel.” So, not bad as arguments go, but the thing is I come from a family that travels with a spare alternator. But a little—little—chaos is probably good for me.

She reunited with her ATM card. Because she’s as charmed as she is forgetful. Because she’s resourceful. I was impressed by how she waited in line and spoke entirely in Spanish and got her card back.

Here’s one thing I’ve noticed about speaking Spanish: The less nervous I am, the more I understand and can say. Yesterday on the way back from Monte Albán, this guide named Eduardo—whom Pedro hooked us up with for a cheaper, off-the-books tour on Thursday—was cracking jokes about how we’d visit the mescal factory and be immunized against la turista, and how there were fruity mescals for the ladies and ones that were like “Mexican Viagra” for the guys, and how hundreds of couples around the world had asked him to be the godfather of their children.

And when he was just talking generally, I understood 90 percent of what he said. But when he looked directly at me, my mind went blank (like when AK was at the bank and forgot the word for “yesterday” and said, “el día antes de hoy”). 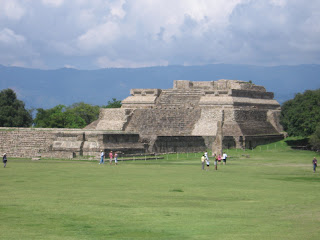 When I pictured visiting indigenous ruins in Mexico, I pictured a clearing in a rainforest and something very tall to climb. But except for the hour of warm and pleasant rain that seems to happen around 5 p.m. every day, it’s dry here and almost exactly like L.A. When the air isn’t different, the place doesn’t feel that different.

Also, Monte Albán—built by Zapotecs and abandoned years before Europeans arrived—is on top of a squat, curvy mountain. They sheared the top off and built stone pyramids that had houses or temples on top. They stuccoed them white. They built wells and worshipped jaguar-bat gods. 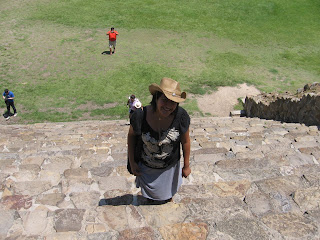 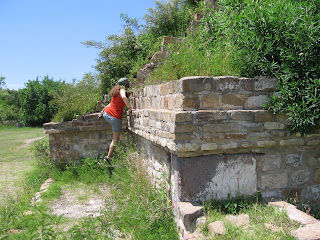 Our guide was a funny-serious Zapotec guy named Eloy, who said he’d been leading tours for 25 years, but didn’t look much older than 35. After the tour, AK was chatting with him and he asked, “What are you doing for the fiesta tonight?” 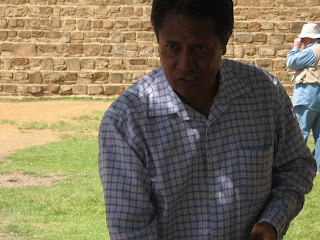 In my head I was like, There’s some sort of festival going on?

But AK’s a little quicker than me and turned on what Pedro later described as the “AK-itude.” Also, Eloy’s hand was on her knee. At two different points.