I’m back! And while I managed to avoid getting la turista (a.k.a. Montezuma’s Revenge) while in Mexico (unless you count that one ambiguous morning when I may just have had too much coffee), I now seem to be coming down with the flu. But it was worth it! I’ll spare you the details of my swollen throat and instead post some excerpts from my travel journal, along with more pictures of colorful jars of salsa than you ever wanted to see. 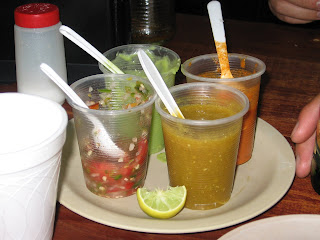 Getting our connecting flight to Oaxaca from Mexico City was an adventure. Thank god for Pedro, who asked questions in fluent Spanish every three or four feet—but we got all kinds of different information about where we needed to go and what we needed to do. Finally we got to the big long immigration line where some of the English instructions were translated creatively: “Rember not to loose your FME slip.” (Pedro promptly lost his FME slip—maybe things would have been different if they’d spelled “lose” correctly.)

We had to run to catch our plane. AK’s flip-flops made her slip and slide on the tile floor and she’d forgotten a belt, so she had to hold her pants up while she ran. But miraculously we made it, panting and shiny-faced. Of course they lost Stephen’s luggage, though.

Los Olivos Hotel is nice, I think, but it was dark when we got in, after the shuttle wound through all these dark streets with little lit-up restaurant stalls; a woman selling flowers with her kids; graffiti; cobblestone. It’s strange because a lot of what’s here is not unlike L.A.—but unlike L.A., people here will speak Spanish to me. I like it. We had a late dinner at the little taco stand next to the hotel. I had a buttery quesadilla and an atole. It was bright and comforting. 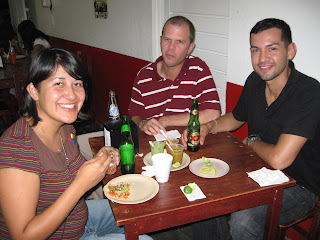 Today started with a feast of a breakfast—not free, but still an all-you-can-eat buffet. Really, it’s one of my favorite parts of traveling—you get to try new things without the stress of ordering and paying for them in another language, and you get to do it in the cool, lovely part of the morning when you’re not dirty and tired yet.

So today: pineapples and papaya; bananas in something that may have theoretically been yogurt but was basically flan; some kind of bean-cheese-toast combo; black beans with sour cream and salsa; and nutty, seed-y cereal.

We walked the two miles to the zócalo, passing bright-pastel store fronts (computer stores, pharmacies, taquerias, vets), a crumbling train station and enough cathedrals that they’re already blurring together for me, like Buddhist temples in Asia. They’re all limestone (I think) and beautiful and have a handful of homeless indigenous people hanging around outside. 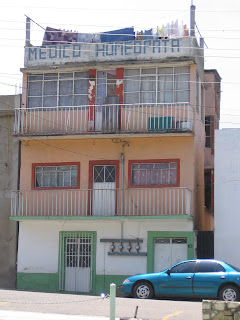 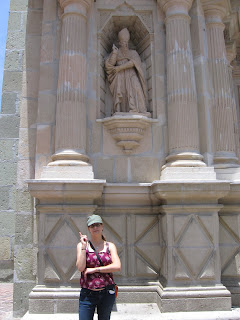 Later we meandered back to the hotel where we threw our tired bodies in the pool with members of the orchestra we’d seen playing Star Wars and Beatles music in the zócalo earlier.