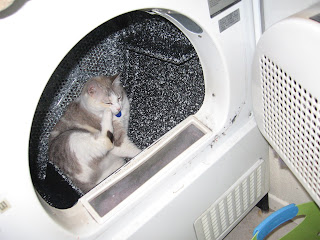 [Setting: front porch of a Highland Park duplex. An iron gate hangs open. A woman in her 50s with a long tangled ponytail and less than the average amount of teeth approaches, hustling two cats along in front of her. She is NEIGHBOR.]

NEIGHBOR [pushing cats through gate, closing gate]: Are these your cats?

ME: Yes. Um, thanks for bringing them home, but actually they’re allowed outside.

NEIGHBOR: Oh, well, you gotta watch out. There’s coyotes around here, you know.

ME: I know—that’s why we only let them out during the day, when we’re home.

NEIGHBOR: Okay. Watch out for the coyotes, alright?

ME: Alright. Thanks for looking out for my cats.

This would not be such a crazy conversation if I hadn’t had it with the aforementioned neighbor at least three or four times. Or if she was an overprotective cat mom herself—but she has cats who freely roam the streets all day. Which makes me wonder: Is she concerned with our cats’ safety, or does she want her cats to have the run of the block like some kind of weird kitty gang mom?

I also—perhaps unfairly, but her teeth could put a cosmetic dentist’s children through college and grad school—wonder if her brain may be just the tiniest bit fried from one of those drugs that makes your teeth fall out. (Heroin? Meth?) 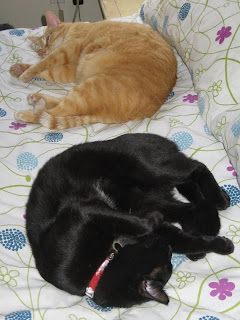 Anyway, you can see why she was a prime suspect when, yesterday morning, there was a small mountain of dry cat food outside our front door. When I opened the door, Ferdinand (left, in black) immediately walked over and started eating. (“Have some class, Ferd,” AK later admonished him. But I have to admit, if it had been a chocolate cake of unknown origins on my doorstep, I would have been tempted too.)

I remembered the movie Year of the Dog, where Molly Shannon’s cute little dog Pencil eats poison and dies. I ducked back in the house for a dustpan and swept up the rest of the food. Ferd gave me a look that said, What is wrong with you?

The day before, Temecula (top, in dryer) had accidentally gotten left out while AK and I were at work. She was still inside before coyote time, but my guess is not that someone is trying to poison our cats, but the opposite: Neighbor saw T-Mec outside, assumed she wasn’t getting fed and dumped a small truckload of Purina on our porch.

The thing is, nothing about T-Mec says “I’m not getting fed.” Other neighbors are constantly remarking on how fat she is, which makes me hate them. And let me add that they’re not exactly supermodels themselves.

So I can only conclude one thing, which is that T-Mec—who is as enterprising as she is pleasantly plump—got trapped outside, got hungry and marched over to Neighbor’s house with Ferd in tow. She pointed to Ferdinand, who could rock skinny jeans quite nicely, and said, “Look, my brother is starving and I don’t have a key. Little help?”

She knows a pushover when she sees one.

Neighbors can be weird! If one of her cats is eaten by a coyote, then it is her loss. She should have someone put a soap bar in her mouth.

I once had a black cat whose named Jinx actually took him out to the pound TWICE even we had a name tag on his collar. To make this story short, Jinx was actually lucky to be found on time.

All I can say that your cats are extremely to have you and AK as owner. I am pretty sure her cats wish you and AK are their owner instead of their master.

ferdinand would look SO sexy in skinny jeans.

You should leave a coyote on her doorstep.

V: Right? AK has long thought so. I think a little white T-shirt and a little vest would look good too. Ferd does not.

J: Maybe a nice vegetarian coyote. Just to give her a scare.

Ha ha! We had a corpulent neighbor in Echo Park who always had to comment on our pug's weight. I had to bite my tongue from replying, "Y tu tambien, Gorda!"
(sorry, don't know where to get the upside down exclamation marks or accented letters on this laptop . . . )

I bet your pug carries his (her?) weight very well.