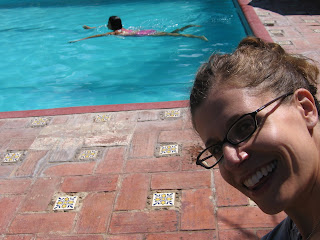 Yesterday was a lazy day, but days are like fishbowls and we grew our lazy selves to fit it. We cabbed down to the zócalo for lunch and ate at a row of stalls each seeming to sell the exact same four items, each staffed by a woman in a checkered apron and maybe a kid or two, each covered with bright oilcloth tablecloths. 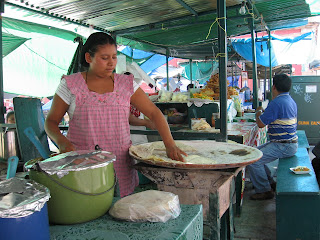 We’ve seen more than a few kids working here, and while there seems to be a healthy middle class and working class, there were also the shanty towns we drove by on the way to Monte Albán. There’s also the fact that the poorest people are almost without exception Indians (our yoga teacher: pretty white-looking; the woman living on the steps of a storefront a few blocks from here: dark skin and a long tangled braid). It makes it seem all the more bizarre that in the U.S. we just talk about “Latinos” like they’re one massive entity, which is its own kind of racism.

On some level, I feel like I don’t have any more observations about global poverty—maybe because I spend so much time thinking about it (not to be confused with doing something about it) that when I actually witness it, I just think, Right, yes, there’s that. 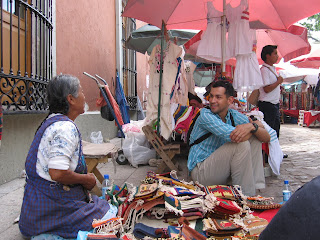 After lunch AK, Pedro and I took a yoga class (nothing says limousine liberal like a segue from global poverty to yoga) at the spa that’s attached to the hotel, and it was unlike any yoga class I’ve taken before. The cool thing was that we were the only non-locals in it (I also like that most of the guests at our hotel seem to be Mexican).

The not cool thing about the class was that it sort of sucked. It wasn’t “yoga” so much as “1950s calisthenics on a mat.” Not that American yoga looks much like Hindu yoga, I’m sure. My body was already angry because I’m on my period and getting a cold, and this did not make it any happier. AK and I left at the break, at which point everyone else took a bath (huh?), then reconvened. Pedro stayed and he said someone shared an article about the importance of drinking a lot of water, and everyone asked for copies. Then they finally did some yoga.

We went to a bar called Fandango, which I thought would have lots of neon and bad dance music based on the name, but it was more like a coffee shop that served alcohol, which is how I would like all bars to be. We played a Mexican card game called Ladders that Pedro taught us, and drank Donajís, which are sort of mescal sunrises. 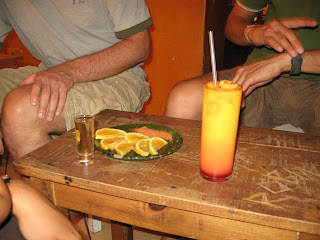 We met two guys from New York (one was from Fullerton originally; it was a tourist bar, but not in a terrible way). They were gay law grads who talked in this voice that was one part SoCal drawl, one part East-Coast upper-class ridiculous. They’d traveled everywhere and spoke great Spanish and didn’t think they’d ever roll out of bed in time to make it to a museum. I was profoundly unimpressed with them and of course a little bit envious.