Yesterday was our big tour day with Eduardo. We piled into a big van with a bunch of Europeans—all a little younger than us, all with more vacation time and more stamps in their passports, I’m sure—as well as a few Mexicans.

Our first stop was the world’s widest tree in Santa María de Tule. You can’t get much more touristy than showing up in a van at the World’s Something-est Something. But part of what I enjoyed about the tour was getting out of the city and seeing the suburbs and little villages. The brick and adobe dwellings that bleed into each other; the corrugated tin roofs; the DIY plumbing; tiny stores; burros and goats and bat-eared mutts wandering the streets; corn and agave growing out of the sides of the mountain.

It confirmed that while downtown Oaxaca may be East/Northeast L.A., the outskirts and villages are not…what, Valencia? Palmdale? Escondido? Lodi? Julian? They are genuinely Somewhere Else. 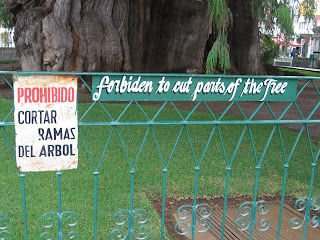 Our second stop was a Zapotec town called Teotitlan, where they weave beautiful rugs using traditional methods—hand-spinning the wool, dying it with indigo and crushed bugs, weaving it on a hand-operated loom. It was cool to see such amazing craftsmanship and disappointing that I couldn’t afford it. It made me think that I should buy a few nice things with my money instead of 75 mediocre things at Target.

It was also cool to see how different artists make a life for themselves. And maybe it’s silly to put myself in the same category as Zapotec weavers because our lives are so different, but I couldn’t help but think how we’re both fighting to keep a tradition alive in a world of $10 everything, of video games and movies. And if I respect their efforts—and I do—then I can’t dismiss myself as being irrelevant either, just because novels aren’t as popular as they once were. 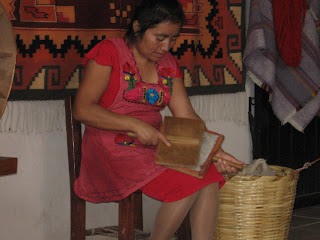 Our third stop was Mitla, which in my opinion was a more fun ruin than Monte Albán—there were more nooks and crannies and rooms you could climb into, and more mosaics in tact. 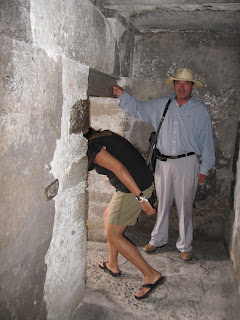 There we (meaning Pedro, our outgoing and bilingual leader) befriended Stefan and Anina, a Swiss-German couple in their mid-20s. We had lunch and, later, dinner and drinks with them. They were nice, even though I could practically feel B drooling over Anina with her Sinead O’Connor haircut all the way from Bloomington, but by that point I was feeling tired and introverted. 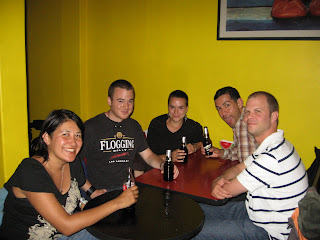 One of the most beautiful parts of the day was the “petrified waterfalls,” which took us up a winding mountain road—in the rain—that had me petrified, and through a tiny village to a natural spring and the giant yellow stalactites it had created. Even though a big hotel and resort had just been built there, for now it’s still secluded and quiet and rainforesty (meaning simply, nature cranked up a notch). People swam and waded in the pools and I tried the spring water. It was lightly bubbly and salty, but also tasted a bit like pennies had been soaking in it. 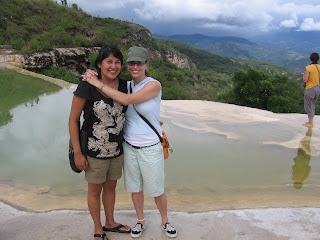 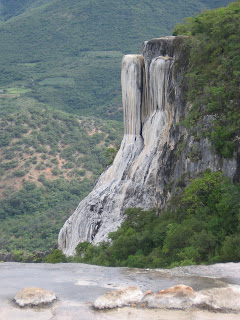