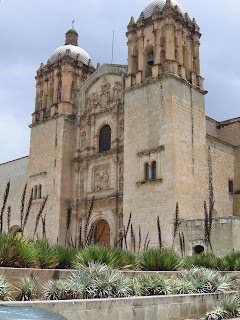 Yesterday we went to the Museo de las Culturas de Oaxaca at the Santo Domingo cathedral. It was huge and divided into dozens of tiny former monks’ quarters, or something. I wasn’t super into the ancient artifacts, but I liked reading about the history of the region (and trying to read it in Spanish, as if history isn’t lost in translation already), and I was even more into the post-conquest parts, which made me feel like I was sort of twisted. 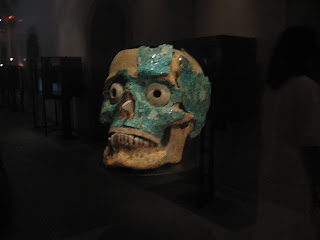 It rained hard in the afternoon and we took shelter in La Soledad chocolate store, where it was dry and there were tall shelves made of carved wood, bits of hard hot chocolate to taste and lots of chocolate and mole to buy.

All of us were too full for dinner, but we ate anyway, in a restaurant in the Santo Domingo area, which Pedro calls the Silver Lake of Oaxaca, although I think Santa Monica might be slightly more accurate. It was fun to see the area on a Friday night, full of 17-year-old hipsters and a quinceañera being followed by her hired paparazzi, the night all cool and rainy-fresh. (Are people in their late 20s and 30s all at home with their kids? I wondered. I didn’t see many. I wondered if adulthood was more disappointing in other countries, and if that made youth seem more special. But then I thought how it would be hard to place more value on youth than we do in the U.S., and that my question was probably very American.)

We were quiet for a while. Stephen and I drank giant mugs of Oaxacan hot chocolate and we watched The Simpsons in Spanish on TV, followed by some really awful British version of Jackass. We talked about our lists—celebrities we get a free pass from our significant others to sleep with, should the opportunity arise. AK and I talked about how it’s different for girls—that no matter how hot someone is, we have to have a conversation with her before we can fantasize. Nevertheless, soon we had lively lists going. At that moment AK’s was, I think, Jennifer Connelly, Mary Louise Parker and Rosario Dawson. Mine was Michelle Rodriguez, Chloe Sevigny and Justin Kirk, although I feel like AK would be more likely to go for a boy than I would in most instances.

How’s that for a back-to-L.A. note to end things on? 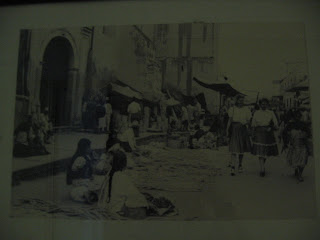 If you combine people from both your lists you have my list. How funny! (Chloe, Rosario, Jennifer)

If we're all at the same awards ceremony at the same time, we'll have a cat fight on our hands. Or a foursome.

Oops, once again, that was Cheryl, not C.C. writing. (Although in this case perhaps I speak for C.C./AK as well.)

Angelina Jolie would make my list. Proving your point, it wasn't until I'd seen interviews with her that I considered her so intriguing.

Also, welcome back. I enjoyed all your travel tales and pics!

I'm a sucker for sexy voices (hence Justin Kirk), but accents don't do it for me so much. I think I'm the exception with that one, though.

Will have to Google Claudia Black....

I miiiiiss Mexico!!!! Can you hear the whine in my post?

Michelle Rodriguez is the only name on my list (we each have 1). However, this has nothing to do with a conversation she and I may or may not have, which would probably not make her more hot to me since she seems like kind of a dopey hippy. Don't read her blog...

Oh no, she has a blog? Yeah, actually the person on my list was "Pre-crazy-jailbird Michelle Rodriguez." Who's on Kim's list?