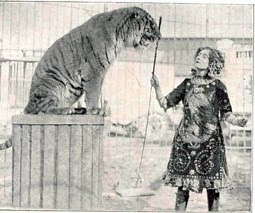 1. a tale of two universes

I found a January 2009 issue of In Touch Magazine in front of our house on Saturday and spent the weekend thinking about the parallel future we would be living in had all In Touch’s reported rumors panned out. A world in which Suri Cruise would be a big sister and Ashlee Simpson would be single.

It also inspired me to make a what’s hot/what’s not-style list comparing Sara Gruen’s Water for Elephants to Robert Hough’s The Final Confession of Mabel Stark. In the Hough/what’s hot column, you’d see statements like “Heroine who can kick a full-grown tiger’s ass (but chooses to talk nicely to him instead)” and in the Gruen/what’s not column, it would say “Female lead in need of constant rescuing and consolation.”

Except I can’t figure out how to make two columns in Blogspot’s little “New Post” window, and it seems a little mean to Gruen besides. AK claims I never post a negative review on GoodReads, but most books that hold my attention to the end have something going for them, Water for Elephants being no exception. It’s full of circusy goodness; it’s pretty action-packed; there’s a nice twist at the end; and I loved Rosie the elephant, though she arguably has more personality than the book’s human characters.

I want to rag on it only to ponder why two books so similar in content (animal training in the circus’ golden age) and structure (older person looking back on said golden age) can receive such different levels of attention. Mabel Stark was published in 2001, and it has a few nice blurbs and a bunch of GoodReads reviews, so it’s not like it got no attention. But pretty much everyone and their book club has read Water for Elephants.

It’s not like Mabel Stark is this eggheady experimental work, in which case I would still champion it but understand its lack of popular appeal. In fact, it’s one of the funniest, most readable books I’ve read in a while.

Elephants has a love story at its center, but it feels almost like a love story that a male writer thought up because he’d heard book club ladies like romance: The main character, an overly wholesome young veterinarian, spots the overly wholesome Marlena across a room and goes about risking his life to get her away from her abusive husband, though it’s never clear what’s so swoon-worthy about her in the first place.

Yet Elephants was written by a woman, and Mabel Stark, a novel far more feminist in spirit, was written by a man, so go figure. Mabel loves several men and marries more, but my favorite and hers is her fifth husband, a cross-dressing half-Indian named Art Rooney. I found their scenes far steamier and more romantic than Jacob and Marlena’s lovelorn glances. But hey, maybe I just have a type.

Or maybe it’s because Robert Hough is Canadian, or because Mabel’s relationship with her tiger Rajah is also less vanilla than Jacob and Marlena’s.

But what I’m saying is, if you read just one circus novel this year, you know which one I recommend.

How'd you guess? But don't worry, I won't start making people submit argumentative essays as part of the nomination process.