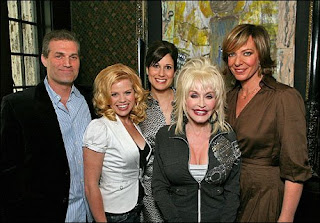 When AK and I saw Rilo Kiley play at the Grove in Orange County a few months ago, their opening act was, somewhat randomly, Dolly Parton. It seemed she’d followed them home from a gig in Vegas.

“Wait, okay, I feel a little stupid for asking, but that’s not really Dolly Parton, right?” I whispered to AK.

No, it wasn’t. But the real live Dolly did show up at the Ahmanson last night to introduce the new musical version of 9 to 5, for which she wrote the music and lyrics.

“They’re still working some of the kinks out, so if they’ve gotta stop the show for a minute, be nice,” she said. I wanted to curl up in her voice and nap like a kitten. “I’ll just put on a show or something,” she laughed.

“So that is the real Dolly, right?” I whispered.

Yes! And the show—which was lots of fun if not exactly groundbreaking—did hit a technical glitch shortly before intermission, and even though Dolly appeared to have been kidding when she said she’d put on a show, she led sing-along versions of “9 to 5” and “I Will Always Love You.” I’ve never seen a theater crowd so close to throwing its panties at the stage.

AK and I had gone to celebrate our two-year anniversary, which was actually six months ago, but we’re slackers like that. AK saw the movie 9 to 5 dozens of times when she was younger and was totally giddy when Dolly showed up. Earlier in the evening I’d enjoyed bumming around in the twinkle lights of the Music Center, watching happy dressed-up people buzz with energy and eat overpriced salads, remembering my college days when I saw plays and musicals all the time. What I love about the theater, I remembered, is the same thing everyone loves about Dolly: Even when it’s fake, it’s real.

I CANNOT WAIT to see this. I would be throwing my panties on stage too!

In which case all the straight girls will swoon.

I would've lost my sh*t if I saw Dolly Parton - I so seriously love her. Don't you wish you could hang out with her? I sure do.

I totally wish I could hang out with her. She and Jessica Simpson are apparently BFFs now, and this is the first time I've ever envied Jessica Simpson, except maybe for her abs.

I love 9 to 5. The movie is a riot, seen it many a time. If I were in LA, I'd go see the musical just for Allison Janney. She rocks!

As does Dolly...I've gotten totally mesmerized by watching her play guitar with her super long nails. And yet, she sounds so down-to-earth in interviews and the like. Excellent.

Ok so that IS Dolly in that picture, right? Because if so, DAMN her face scares me! Do you think she and Priscilla Presley have the same plastic surgeon?

Count me in, too, as a huge fan of the movie version, still.
Congrats to you and AK - Happy Two & a Half-a-versary!

N: Thanks! And yes, see it. And get to the theater early because if you find great street parking like I did, it will make the night even better.

C: As someone who can't even play Guitar Hero with short nails, my admiration for Dolly only grows.

S: Yes, I think it's quite possible that they have the same surgeon. But since Dolly is always up front about her physical fakeness, I don't hold it against her. I hate those stars that are like, "I just work out and try to drink a lot of water."

PV: Thanks, Peter. I like the world "half-a-versary." I will try to use it in a sentence today.

i thought it was dolly.

lOVE THIS!
So pleased that the show will come over to the UK soon...it was great on Broadway. London needs Dolly!