Another day. Another train station. Another power struggle. The peaceful four hours of reading and sleeping on the train to York that I was hoping for were not to be. After our transfer, the train got really crowded, and we quickly discovered that a lot of people had reserved seats. Those who hadn’t, like us, had to play musical chairs or stand in the aisles. It all seemed kind of third world, minus chickens, and made me long for the civility of air travel. Cathy and I were worried about our tons of luggage, and about one mysterious unattended bag. Why is there always one?

“I was thinking heroin,” I said.

Meanwhile, Dad asked the train attendant a lot of questions, and befriended the woman next to him, who told him all about her three boyfriends. When the train stopped in York, we were delayed while some guy got escorted out by police, so we had time to gather our luggage. Thank you, rude young man without a ticket! 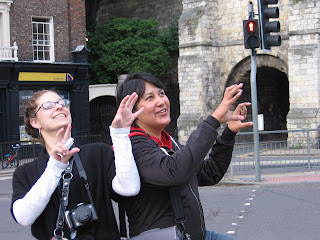 In the evening we took like one of ten different ghost tours offered around town—apparently York, which has Storybook Land streets lined with brick and Tudor buildings, all drooping charmingly, is the Most Haunted City In The World. Tony, the guy who led our “no gimmicks, no masks” tour, was pretty great. A 12th-generation Yorker, he was low-key, a good storyteller and a glass blower by trade, so he could answer my dad’s 75 questions about the restoration of York Minster’s windows. 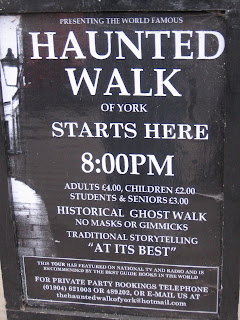 The saddest story Tony told was about a little girl who haunted the site of a work house, where many kids were neglected and denied proper burials when they died. Apparently a lot of people have seen her reaching up to them or felt her trying to hold their hands. It made me want to adopt a seven-year-old. Although, if I can barely handle my dad, I don’t know what makes me think I can take on an emotionally scarred orphan.

It's heart breaking to think about how real that was/is, no matter what one may believe about ghosts.
It makes me wonder if I would be scared as well as sympathetic.

It was still light out, so not too scary. But yes, Dickensian England was plenty scary if you were poor and under the age of 15.