I lost my temper with my dad some more. I may have used the phrase, “For us non-robots….”

But miraculously, or maybe not, due to the upside of robotics, we were able to have a nice time in Streatham, where my dad’s mother was born. We didn’t know much more than that, so there were no touching family stories, but it was cool to get out of Zones 1 and 2 and see what non-tourist London is like.

I think the U.S. is the only country where the inner cities are rough and the suburbs are posh. So Streatham seemed like a working-class town, with a lot of women in headscarves and stores where you could wire money to Ghana and trucks unloading sides of beef. We didn’t do much there, but we found a charming old Anglican church, St. Leonard’s (one of the lesser-known saints?) with a rector named Mandy. We couldn’t find any Standings or Desdemaines-Hugons among the lovely mossy headstones, though, and most of the engravings were long rubbed off. 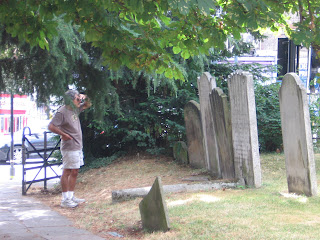 In the afternoon AK and I went to the Victoria and Albert Museum, which my sister had described as “meh, a couple of Roman columns.” But we loved the fashion and photography exhibits, and they had a great exhibit called something like “Architects Build for Small Spaces.” They commissioned a bunch of architects and firms from around the world to built structures inside the museum: a lighted woodshed, a tower of books, a rehearsal space full of nooks and crannies. 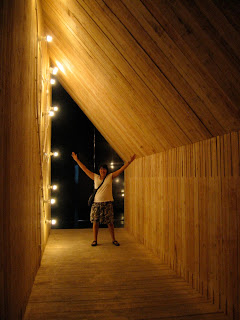 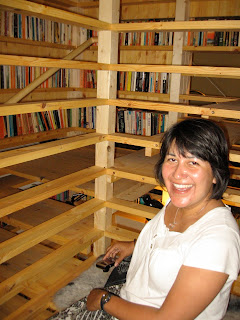 And we really liked the gift shop too. At one point AK pointed to an item and started shouting, “Tracy, Tracy!” I was like, “I don’t see Tracy,” and then I saw it. But I won’t say what it was in case it hasn’t reached her yet.

On the way back, we took a walk in the park across the street from our hotel before learning it was a private garden belonging to the people who owned the surrounding condos. We learned that when we got locked in.

We had a nice family dinner at an Italian restaurant. A bottle of wine is an amazing tool of peace. 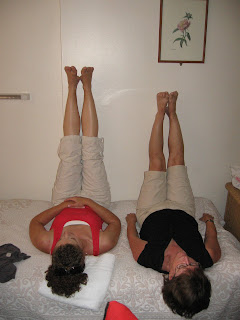 Whoa, you posted these all at once. Cool, but may take me a bit to read through them all.

Oddly sort of nice to read about someone else having tiffs with family. Been there.

The “Architects Build for Small Spaces” looks very cool. I'm always fascinated by the design plans and layouts of tiny spaces when they're featured in Dwell magazine.

No worries, it's not homework. :-) I wrote them all while traveling, so uploading was just a matter of strong coffee and a lot of typing.